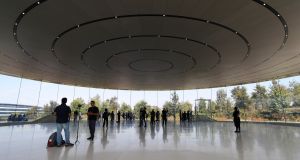 Apple’s campus in Cupertino, California. The tech company built up an offshore cash pile of over $250 billion from profits earned offshore over many years, the bulk of them booked through Irish subsidiaries. Photograph: Jim Wilson/New York Times

Apple is unlikely to get a write-down of its US tax bill to fully reflect any payment made to Ireland, if the European courts dismiss the appeals which the company and the Irish Government are making against the controversial European Commission decision that it owes €13 billion in back tax here.

Apple announced on Wednesday that it is to pay the US government $38 billion (€31 billion) in tax relating to money it is repatriating to the US. The payment comes on foot of new US tax legislation which is ending the ability of US companies to defer tax on cash held offshore.

Apple built up an offshore cash pile of over $250 billion from profits earned offshore over many years, the bulk of them booked through Irish subsidiaries. The EU ruled that the Irish Government offered illegal state aid to Apple in the way it allowed the company to arrange its tax affairs, and ordered that it pay the Irish Government €13 billion, plus interests and penalties.

Apple is due to shortly start paying money into an escrow account, overseen by the Irish Government, pending the outcome of appeals against the decision by the company and Ireland. Fund managers are likely to be appointed in the first quarter of this year to manage the money, with payments starting during the second quarter.

Normally when a company pays tax overseas, it is allowed to reduce its tax bill in its home country by receiving a credit equal to the amount paid. However, the new US tax legislation is offering a special once-off rate of 15.5 per cent for repatriated cash and offers reduced credits against the resulting tax bill for tax paid overseas. If Apple paid the full €13 billion in tax, it would, under the rules, receive a US credit of around €5.76 billion. The arrangement would also have to be approved by the US tax authorities and, as the Apple situation is unusual, some uncertainty still surrounds its likely tax treatment.

Apple thus has a financial incentive to continue the appeal against the commission’s decision, which would also involve paying interest and penalties on the tax bill.

The European Commission said that “nothing has changed” after the move to pay tax in the US.

“Over many years, tax rulings issued by Ireland allowed Apple to pay less tax on profits recorded in Ireland than other companies,” the European Commission said in response to questions from Bloomberg.

“This gave Apple an illegal advantage.”

Ireland’s delay in extracting some €13 billion in tax from Apple has already raised the ire of EU competition commissioner Margrethe Vestager. The EU is taking the Government to court for failing to recoup the money.

Taoiseach Leo Varadkar said it will start collecting the tax bill in the second quarter of this year. Any funds will be held in escrow while the State and Apple fight the EU order in court. This is likely to take a number of years, with the case first being heard by the General Court, with the losing side then likely to appeal to the European Court of Justice. The commission found that two tax rulings made by the Revenue Commissioners offered Apple a selective advantage and this constituted illegal state aid.

1 Volvo warns of scaled back car line-up if UK splits from EU rules
2 NI house builder apologises to Harry and Meghan over adverts
3 Little strategic thinking in election manifestos of Fine Gael and Fianna Fáil
4 Are there annual limits on inheritances or gifts to a child?
5 Opioid executive admits to ‘no morals’ ahead of prison term
Real news has value SUBSCRIBE