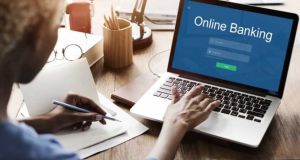 During the last decade, online banking by European Union citizens as a whole has jumped from 25 per cent in 2007 to 51 per cent at the end of 2017

Online banking has more than doubled both in Ireland and for Europe as a whole over the last decade, new official figures show.

The Financial Services Union (FSU) said however that while consumer behaviour has changed, there is still a need for banks to have a strong physical presence in Ireland.

Data from Eurostat, the European Union’s statistics office published earlier this, revealed that 58 per cent of Irish citizens were using online banking last year. This is above the EU average of 51 per cent and compares to just 25 per cent of the public here in 2007.

The figures show the numbers availing of online banking inched up slowly for a number of years in the late 2000s before jumping 10 per cent to 43 per cent between 2011 and 2012.

The data also suggests further room for growth in users with the percentage of Irish citizens turning to online banking jumping 6 per cent alone last year.

“These figures reflect a change in consumer behaviour for certain types of transactions. However, it also needs to be borne in mind that when customers are considering significant financial decisions – such as mortgages, pensions and savings plans for instance – that they highly value the advice of a qualified and experienced professional,” said outgoing FSU general secretary Larry Broderick.

While banking online is relatively popular here, it remains low compared to Denmark and the Netherlands where 90 per cent and 89 per cent of people respectively avail of it.

The lowest use of online banking was in Bulgaria and Romania at 5 per cent and 7 per cent respectively. In addition, less than 30 per cent of those between the ages of 16 and 74 use internet banking in Greece and Cyprus.

Not surprisingly, internet banking is particularly popular among 25 to 34-year-olds, with 68 per cent of European in this age category using this facility.

Eurostat figures showed use of online banking tends to increase in line with the education classified as having a high education level, avail of such services.

The FSU is to hold a conference on digitalisation and the future of banking in May in Limerick.