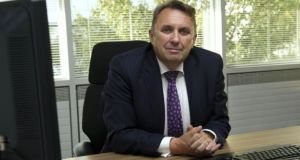 Ergo co-founder and chief executive John Purdy: “We’ve seen considerable revenue growth in the last few years and expect it to increase again in 2018 and are currently finalising a plan to see turnover climb to about €100 million by 2020.”

Irish IT services provider Ergo is targeting turnover of €100 million by 2020 after reporting a €30 million hike in revenues last year.

The Dublin company, which employs more than 250 people, offers IT solutions ranging from cloud and managed services to software and infrastructure. It was established in 1993 by former EY Industry Entrepreneur of the Year award winner John Purdy and Tim Sheehy as a two-man firm selling toner cartridges for printers.

Accounts recently lodged for Ergoservices Ltd show earnings before interest, taxes, depreciation and amortisation (ebitda) rose from €600,000 to a company record of €2.7 million for the 12 months ending March 2017, while operating profit rebounded from a €449,744 loss to a €1.69 million profit.

Turnover climbed 84 per cent year-on-year from €34.8 million to €64.2 million with the company having previously guided for revenues of €60 million. Two years ago, sales were just €24.07 million for the company, which is now forecasting sales of close to €70 million for fiscal 2018.

“We’ve seen considerable revenue growth in the last few years and expect it to increase again in 2018 and are currently finalising a plan to see turnover climb to about €100 million by 2020,” said Mr Purdy, the company’s chief executive.

Sales last year were boosted by Micromail, the Cork-based company Ergo acquired in May 2016 for €6.9 million. It contributed €22 million in revenues, considerably higher than the €18 million originally forecast for the unit.

Mr Purdy said that overall, 2017 was generally a period of consolidation for the firm, which has invested heavily in acquisitions in the last few years.

Following the company’s sale of its 20 per cent shareholding in fintech firm Fenergo to US private equity firm Insight Partners for $75 million in 2015, Ergo has largely focused on integrating recent acquisitions such as Micromail and iSite into the wider group.

Mr Purdy said 2018 would be more of the same for the company but added that the addition of a suitable acquisition target “is always a focus for management.”

Ergo, whose clients include Grant Thornton, Noonan, Beauchamps and Tourism Ireland, had net assets of €7.4 million at the end of the reporting period, up from €6.1 million a year earlier, the accounts show.