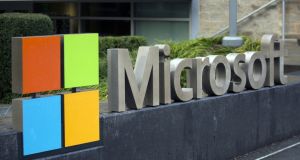 Ibec’s brief argues that the USA v Microsoft case has global implications and that endorsing the US justice department’s position would set a dangerous international precedent. Photograph: David Ryder/Bloomberg

Business representative group Ibec has submitted a brief to the US supreme court in relation to a landmark case involving attempts by US law enforcement to gain access to emails stored on a Microsoft server in Dublin in a drug trafficking investigation.

The Irish business group filed an amicus curiae brief - a brief filed by a party not involved in a case but one that can assist the court - along with four other European business representative chambers. This follows the submission by the Irish government of an amicus brief in December.

The case, USA v Microsoft, arose in 2013 after a New York state judge served Microsoft with a warrant demanding it hand over emails sent through its email service.

The company argues that the data could be lawfully requested in co-operation with the Irish Government using international mutual legal assistance treaties (MLATs).

In October the US supreme court agreed to hear the US administration’s appeal against the decision of the lower court.

Ibec’s brief argues that the case has global implications that that endorsing the US justice department’s position would set a dangerous international precedent and have far reaching consequences for millions of businesses.

Paul Sweetman, Ibec’s director of technology in Ireland, noted the case would effect any organisation handling or managing date whether or not they’re located in the US. “Data and data management underpin the modern economy. Companies and their customers must have predictability and a clear legal framework on how that data is both managed and safeguarded,” he said.

Friday’s filing states that the various business lobby groups are “concerned that an adverse verdict in this case would force them to choose between violating American or European laws, thereby making it more difficult for them to use American technology, products, and services”.

The grouping noted that “various sovereigns have devoted considerable time and resources to create cross-border legal frameworks that reconcile and accommodate divergent local notions of data privacy. The justice department seeks to tear apart this carefully constructed and fragile set of international understandings.”

Ibec’s brief concluded that a victory by the justice department would have the effect of undercutting modern commercial ties and push users to steer their data to non-US providers. None of those developments, it said, were in the interest of either the US or Europe.

While Ibec and the European business grouping argues in Microsoft’s favour, the brief from the Irish government didn’t support either party.

It said the Republic “does not accept any implication that it is required to intervene into foreign court proceedings to protect its sovereignty”.

It also said that the State “continues to facilitate co-operation with other states, including the United States, in the fight against crime”.

It notes that both countries are already parties to a mutual legal assistance treaty (MLAT) from January 2001.

“Ireland, therefore, considers that the procedures provided for in the MLAT represent the most appropriate means to address requests such as those which are the object of the warrant in question.”

Similarly neutral briefs were sent by the European Commission and the UK.

The case is set for argument on February 27th.