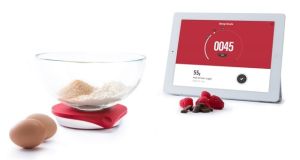 Irish smart kitchen start-up Drop has raised $8 million in a Series A financing round with the owners of Itsa Bagel and the Michelin-starred restaurant Chapter One among the backers.

Drop, which was co-founded by former EY Entrepreneur of the year finalist Ben Harris, has developed a smart weighing scale that wireless connects to a linked tablet app that provides thousands of recipes for home chefs.

Established in 2012 by Mr Harris, along with Jonny McCauley, Jack Phelan and Tim Redfern, the company graduated PCH’s inaugural Highway1 hardware accelerator programme in San Francisco and launched its product in February 2014. It is now available in a number of markets and Drop has also established partnerships with the likes of Bosch and GE Appliances.

The business has its headquarters in Dublin 8 and a satellite office in San Francisco.

The Series A round was led by San Francisco-based venture capital firm Alsop Louis Partners. Other investors included Irish VC firm Frontline Ventures, Ross Lewis, the owner of Chapter One and Domini Kemp of Itsa.

The money will be used to continue development of Drop’s KitchenOS platform for connected appliances in the smart kitchen of the future as well as to support the company’s partnerships with appliance manufacturers worldwide.

“This investment will allow us to accelerate our trajectory towards becoming the de facto platform for the smart kitchen, empowering anyone to make delicious food at home,” said Mr Harris.