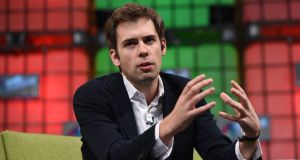 Irish entrepreneur Oisin Hanrahan is a little wary about the effect that Brexit will have on his business. Handy. com. Handy.com was established by Hanrahan along with Umang Dua, Weina Scott and Ignacio Leonhardt in 2012. Back then, it was known as Handybook, and it was set up as a solution to a problem they experienced themselves: trying to find a cleaner.

Fast forward five years and the company is flourishing. Not only has it grown in the United States, but it has taken tentative steps to grow outside its home territory, opening in London.

Unlike other chief executive of US firms with a stake in the UK, Hanrahan doesn’t view London as an entry point to the European market. At the moment, the company is focusing on growing its market there, and there are no plans to open in any other European countries yet.

Brexit is still another year away. In the immediate aftermath of the vote, which was followed a matter of months later by the election of Donald Trump as US president, Hanrahan was adopting a “wait and see” attitude to the situation. But the changing political landscapes in the US and the UK must be unsettling.

Hanrahan stresses that the problem is not with illegal immigration being halted, in either territory, with all Handy workers having the right to work there.

But like other industries, any fall off in people coming to the country to work has knock-on effects for employment in the UK. If Brexit means an end to the free movement of people and labour, tighter immigration controls could cut off the supply of workers for services such as Handy. The fewer people there are coming to work, the more pressure is going to brought to bear on the existing workforce. Jobs at the lower end of the pay scale will inevitably take a back seat.

“We anticipate that is going to put upward pressure on the supply side,” he says.

The effect has been somewhat muted in the US, where Hanrahan says there hasn’t been much change in legal immigration despite the rhetoric of the Trump administration. That doesn’t mean it is all positive though.

“As the economy has picked up, we see a fall in unemployment rates that made it more challenging to serve a city,” he says. “Particularly in cities like Seattle and San Francisco, where the unemployment rate is below 4 per cent, it’s hard to recruit people to work in certain roles at that level.”

But Handy is still growing. The company has weathered a few storms of its own – a cut in its customer service staff, the prospect of legal action related to the gig economy – and outlasted rivals like Homejoy and other similar businesses.

It has made some changes along the way. In the past, it conducted face-to-face interviews for all new contractors it was bringing on board; now, that process is mostly automated. Technology has been key in making the business more efficient. Since that change took effect, business has been booming.

The latest success is shifting from a sole focus on the consumer market, to a business one. The company has signed deals with several retailers – including Walmart and Wayfair – that sees Handy’s services sold at the point of sale. When you buy a TV for example, you are offered installation for a fee. That service is provided by Handy, and according to Hanrahan, it has become an important part of the business.

“At the start of the year we were very focused on the core business – handymen, cleaning, straight to consumer. What we realised was many of the bookings were starting to be product – furniture assembly, for example,” he says. “We were getting more and more in from retailers asking if we were selling our services.” At that point, Hanrahan says, the core business was performing well. “We knew the core business was working and allowed us to lift our head up and say ‘okay what’s next?’”

Nine months later, the company has a new revenue stream, and while the bulk of its business is still in sending cleaners or handymen to your house, dealing directly with companies accounts for about half of Handy’s new business.

Handy now has integration with furniture retailer Wayfair, UPS and FedEx, giving them the information about the product and when it is going to be delivered. The installation is automatically scheduled for the day after the delivery, and customers can change that if needed.

“That business line has exploded. It’s changed how we think about what we’re doing quite a lot,” he says. “We originally thought we were just building a direct to consumer business.”

Now, Handy sees itself as having a business similar to UPS or FedEx. While there are direct to customer elements of it, they also have a direct to business model. That in itself has facilitated its expansion in the US. “We’re effectively nationwide at this point,” Hanrahan says.

It’s a step towards building the “Amazon for services”, and one that is likely to grow further. Amazon itself may be the catalyst for this. It offers free installation with some products, pushing rivals to feel that they have to at least offer the service to customers, even if it’s not free of charge.

The plan for growth is adding verticals rather than geographic territories. Smart home set-up is a service that is on the horizon, and Hanrahan plans to take things further. The focus, however, is always on one thing.

“The more we can go past cleaning, the better relationship we can build with customers,” he says.

Open for business: How industry has adapted to survive the lockdown 06:24
If lockdown has morphed from tactic to strategy, the State has failed 05:59
John FitzGerald: North needs reform more than unity 05:53
Company boards must serve more than just investors 05:43
Unresolved grief can extort high price on worker’s wellbeing 05:30

1 If lockdown has morphed from tactic to strategy, the State has failed
2 John FitzGerald: North needs reform more than unity
3 How long can Government afford to keep State pension age at 66?
4 Farm lobby seeks EU ban on vegan ‘burger’ and veggie ‘sausage’
5 Guinness brings out a non-alcoholic version of the black stuff
Real news has value SUBSCRIBE