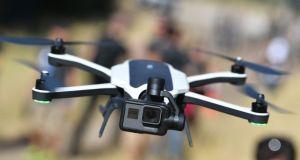 GoPro launched its Karma drone in late 2016 but within weeks of the first customers buying Karma, several owners reported that the drone abruptly fell out of the sky. Photograph: Josh Edelson/AFP/Getty Images

First its drones plunged, then its sales, then its shares. Now it could be up for sale.

GoPro, the once high-flying action camera maker, warned on Monday that holiday period sales of its products had been sharply lower than expected, and it would cut jobs and close its drone business.

But while its shares dropped as much as 33 per cent to an all-time low in early trading, they pared their losses on news that the company had hired bankers to consider a sale.

JP Morgan has been hired to examine the company’s options, according to people briefed on the agreement. GoPro’s founder and chief executive, Nick Woodman, said earlier in the day on CNBC that he was willing to “unite with a bigger parent company to scale GoPro even bigger”.

Despite its brand becoming synonymous with action cameras, GoPro has faced growing competition from smartphones as video camera resolution improved and more phones became waterproof. Its move into drones was key to its attempt to diversify its business into higher-value products.

GoPro launched its Karma drone in late 2016 but within weeks of the first customers buying Karma, several owners reported that the drone abruptly fell out of the sky.

The company said it was cutting more than 254 jobs, or a fifth of its workforce, and exiting its drone business as part of its efforts to slash costs after fourth quarter sales fell by much more than feared.

For the three months to the end of December, GoPro said it now expects revenue to come in at $340 million (€284 million), a 37 per cent drop from the prior year period and much worse than the $472 million (€395 million) the market had forecast.

GoPro attributed the sales warning to the $80 million (€67 million) hit it is taking from a “price protection” policy on its Hero camera range and Karma drones.

Price protection is the money that GoPro has to refund to retailers who purchase cameras at a higher price, whenever the company lowers the suggested retail price, as it did for the Hero5 camera, launched in 2016.

“As we noted in our November earnings call, at the start of the holiday quarter we saw soft demand for our Hero5 Black camera,” said Mr Woodman. “Despite significant marketing support, we found consumers were reluctant to purchase Hero5 Black at the same price it launched at one year earlier. Our December 10th holiday price reduction provided a sharp increase in sell-through.”

As a result of the hefty discounting, GoPro now forecasts fourth quarter gross margin to be between 24 and 26 per cent, down from 39.2 per cent recorded last year. GoPro did not talk about how fourth-quarter earnings would be affected.

It did say, however, the restructuring plans announced today will result in a $23 million-$33 million (€19 milion-€28 million) hit to first-quarter results.

Its sales woes will put further pressure on Mr Woodman, who the company said on Monday will reduce his 2018 annual salary to $1.