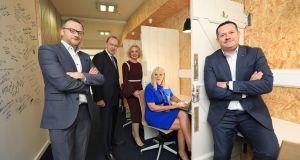 HQTralee, which was officially launched by Minister for Jobs Mary Mitchell O’Connor, plans to support up to 100 jobs by July. Photograph: Valerie O’Sullivan

HQTralee, a business and innovation hub in Tralee, Co Kerry, has been awarded two years of free gigabit fibre broadband from Vodafone and Siro as part of the companies’ national gigabit hub initiative.

The hub was also officially launched by Minister for Jobs Mary Mitchell O’Connor on Friday.

The hub in the centre of Tralee currently supports more than 50 jobs and expects that number to double to 100 by July.

The initiative from Vodafone and Siro was created to empower local businesses and communities through connected technologies.

The six towns to be awarded free connectivity as part of the first phase of the initiative include Tralee, Drogheda, Dundalk, Letterkenny, Cavan and Carlow.

Kevin Tobin, cofounder of HQTralee, said: “There’s no reason why people shouldn’t be able to enjoy the lifestyle of living in a town like Tralee, but being able to take advantage of the same level of broadband connectivity as Hong Kong or Tokyo. ”

Anne O’Leary, chief executive of Vodafone Ireland, said: “We are delighted to be in a position to support local businesses through vital hubs such as HQTralee. If this success is replicated across all six hubs, it has the potential to create up to 600 jobs across Ireland in 2017.”