Microsoft profits up 27% on demand for cloud services

US tech giant’s income rises to $4.8bn as LinkedIn contributes $975m in revenue in Q3 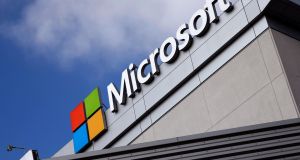 Microsoft reported a 27.8 per cent increase in quarterly profit on Thursday, lifted by robust demand for its cloud computing services.

Under chief executive Satya Nadella, who took the helm in 2014, Microsoft has sharpened its focus on the fast-growing cloud computing unit to counter a prolonged slowdown in the PC market, which has weighed on demand for its Windows software.

Microsoft said LinkedIn, which it bought for about $26 billion, contributed $975 million in revenue in the quarter.

Microsoft’s shares had risen 9.9 per cent this year through Thursday, eclipsing the 7 per cent gain in the broader S&P 500.

1 Wetherspoon’s panto-villain chairman may have the last laugh
2 UK needs to be honest about its Covid-19 strategy
3 Remote working doesn’t suit everyone, and it exposes woolly leadership
4 Will Covid-19 force Primark to rethink decision not to sell online?
5 Johnson’s Covid positive: a bad omen for UK’s other social distancing project
Real news has value SUBSCRIBE