Cybercrime a reality and one that is hurting Irish firms 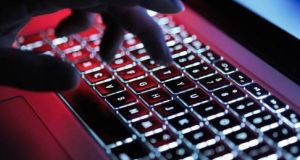 Europol last year warned that cybercrime was growing at such an unprecedented rate that incidents may have surpassed more traditional crimes in some EU states. Photograph: Getty Images

The news that Trinity College’s fundraising arm has been the victim of cyberfraud, while no doubt embarrassing for the institution, will hopefully serve as a reminder to all organisations that it is no longer something that only happens outside of Ireland.

Businesses here have for the most part been somewhat lax when it comes to cybercrime, in part because many refuse to believe it could ever happen to them. However, the reality is somewhat different.

Trinity Foundation admitted on Thursday to having lost money recently as a result of what it called “a computer-based fraud”. It refused to confirm how much money had been stolen, although it is estimated to have been as much as €1 million.

TCD said some money was recovered after the incident was discovered, but it is unsure whether it will be able to claw back the rest. The college has promised to make up any potential shortfall from the university’s future commercial revenues.

While it has become increasingly common to hear about companies experiencing data breaches, the numbers admitting they have lost money due to cyberfraud, particularly in Ireland, is low.

Europol last year warned that cybercrime was growing at such an unprecedented rate that incidents may have surpassed more traditional crimes in some EU states.

It said an expansion both in the number of people involved in cybercrimes and in opportunities to engage in highly profitable illegal activities has led to a “relentless growth” in such activity.

Unsurprisingly, it is rare that organisations come forward and confess to having been the victim of cyberfraud. But the truth is that companies, both here and overseas, are coming under increased attack.

A report from consulting firm PwC last April revealed that cyber attacks against Irish companies have almost doubled over the last few years, with one in five businesses having incurred losses of between €92,000 and €4.6 million.

According to that study, attacks against Irish businesses have jumped from 25 per cent in 2012 to 44 per cent currently, a rate that is considerably higher than the global average of 32 per cent.

If companies continue to be under the illusion that their money is safe they may well end up paying a hefty price.