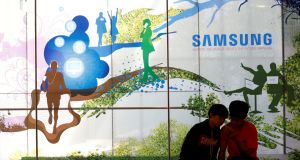 Children look at a mobile phone in front of an advertisement of Samsung Electronic at its store in Seoul, South Korea.

Samsung Electronics has flagged stronger earnings and announced a cancellation of treasury shares after posting a solid first-quarter profit boosted by the memory chip business, sending its shares to a new high.

The company rejected a call from US activist hedge fund Elliott to split itself in two but accepted part of the fund’s proposals on Thursday, revealing plans to cancel its existing treasury shares worth over $35 billion (€32.1 billion) by 2018.

While the first quarter was a torrid time for Samsung as chief Jay Y Lee was swept up in a political corruption scandal, the world’s top maker of memory chips, smartphones and televisions still managed to book a profit that supports expectations for record earnings in 2017.

Elliott welcomed the share cancellation and said it saw “room for even more progress”. The fund had called for Samsung to adopt a holding company structure by splitting itself in two, and to pay out a 30 trillion won special dividend.

“We are encouraged that Samsung Electronics has agreed to take the bold step of optimising its balance sheet . . . even as the company has faced obstacles,” Elliot said in a statement.

In rejecting Elliott’s call for a holding company structure, Samsung cited issues including regulatory and legal risks, and said it would not boost investor returns.

“Samsung concluded the risks and the challenging environment surrounding a change in the corporate structure would not be beneficial for enhancing shareholder value and sustaining long-term business growth,” it said in a statement.

A memory chip super-cycle and the revival of the mobile business – damaged by the costly failure and fire-prone Galaxy Note 7 last year – look set to underpin Samsung’s profitability after the best quarterly result since 2013.

“Looking ahead to the second quarter, the company expects to achieve growth on the back of continued robust memory performance together with improved earnings from the mobile business” following the global rollout of the new Galaxy S8 smartphone, Samsung said in a statement.

Samsung’s chip business remained the top earner with a record 6.3 trillion won operating profit, buoyed by price gains for both Dram and Nand memory chips as supply growth constraints and demand for more firepower on devices such as smartphones and servers boosted margins.

Pre-orders for the Galaxy S8 launched in April were better than many analysts had expected, raising hopes the new flagship handset will make up for the failure of Note 7s.

Recent complaints about red-tinted screens and spotty wi-fi connection on the S8 would not have a major impact on the bottom line, analysts said. – Reuters