Jeff Bezos just $5bn away from being world’s richest person 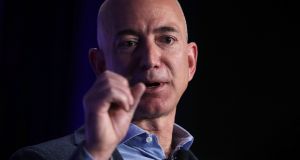 Jeff Bezos: his fortune has surpassed $80 billion for the first time, according to the Bloomberg Billionaires Index. Photograph: Alex Wong/Getty Images

A surge in afterhours trading for Amazon. com added $3.3 billion to the fortune of Jeff Bezos, putting him less than $5 billion away from becoming the world’s richest person.

Amazon shares added almost $50 after the company projected sales that may beat estimates in the current quarter, furthering an unbroken 20-year streak of double-digit revenue growth. Amazon had first-quarter sales of $35.7 billion and earnings of $1.48 a share, beating Wall Street analyst expectations. Shares closed at $918.38 on Thursday and reached as high as $965 afterhours.

The rise for Bezos beat the afterhours gains seen by Google co-founders Larry Page and Sergey Brin. The pair added $1.4 billion when shares of Google parent Alphabet rose as high as $938.18 on news that the smartphone ad business helped Alphabet post revenue of $20.12 billion and net income of $7.73 a share.

Microsoft Corp. co-founder Bill Gates has been No 1 on the Bloomberg index since May 17th, 2013. His fortune slipped $200 million to $87.1 billion after hours as Microsoft presented mixed results and slowing tablet sales growth. – (Bloomberg)

Educational technology company Code Institute raises €1.2m 05:21
‘Things were tight then, my mother was raising us on her own’ 05:20
Workers may face tax bill on emergency State wage subsidy 05:05
Business This Week : Focus firmly on economic indicators 18:00
Dublin software company Workhuman ‘on course’ for €1bn valuation 15:12