The device Bump monitors social distancing, a challenge for companies trying to bring employees safely back to the workplace 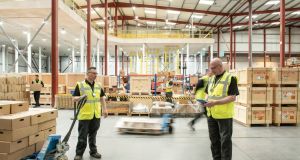 Bump produces encrypted data so employers can monitor movement and interactions. If an employee tests positive for Covid-19, the device will enable track and trace at workplace level within minutes

It is, Brian Palmer admits, slightly uncomfortable to talk about how well your company is doing when others are struggling to survive in the face of a global pandemic.

The chief executive of robotics group Tharsus knows complacency has no place in business; even his company’s location, the former shipbuilding and coalmining town of Blyth in Northumberland, northeast England, offers a constant reminder of how once-solid economic activity can vanish.

“The world is changing really quickly,” he says.

Sitting in a meeting room at Tharsus, Palmer is wearing a circular disc which flashes white every 10 seconds, silently confirming he is two metres from the nearest person. When he leans forward the flashes turn to blue, indicating a gap of between 1.2m and 2m. Any closer and it would flash red and beep.

This device is Bump, a traffic-light personal motion system that is Tharsus’s technology response to Covid-19. Developed in just eight weeks by combining wearable and static devices that communicate with one another using radio frequency software, it is now being sold and used in offices, factories, logistics and the NHS.

While many UK businesses became involved earlier this year in the government’s ventilator challenge – a mixed experience for some – Tharsus instead thought laterally. It focused instead on monitoring social distancing, a challenge for companies trying to bring employees safely back into the workplace.

As well as reminding them to stay apart, Bump produces encrypted data so employers can monitor movement and interactions. If an employee tests positive for Covid-19, the device – which is GDPR compliant – will enable track and trace at workplace level within minutes, says Palmer.

Tharsus works with companies to solve their automation problems, combining technologies to give them a competitive advantage.

It helps design, and then manufactures, “strategic machines”, including robots, using its engineering design expertise, production capability and supply chain partnerships. Positioned at the sharp end of current trends, it has made its own luck.

Yet nothing initially suggested Tharsus, founded in 1964 as a small Tyneside metal-bashing company by three workmates who had won the football pools, would become a UK leader in product innovation and commercialisation.

When Palmer, a mechanical engineer with an automotive background at Nissan and Ford, bought the company with a business partner in the late 1990s it had been starved of investment. He ploughed in money and innovated, but, with a customer list he has described as “a who’s who of corporate disaster”, it was hit by the dotcom crash in 2001 and then the 2008 recession.

Yet his tenacity, buying out his co-owner in 2003 to gain full control and moving into bespoke product design and development for national companies, foreshadowed things to come.

The Tharsus premises of 2020 are sleek and spacious, with stylish equipment, black-clad employees and dazzlingly white manufacturing areas.

“We work on projects which have a strategic impact,” says Palmer. A prime example is the partnership with Ocado Group, the online grocery platform provider. In June, Ocado announced it was extending until 2024 its agreement with Tharsus. This builds on an existing seven-year relationship at the very time the Covid-19 pandemic is driving growth in online shopping.

Tharsus helps develop and then manufactures the robotics at the core of the Ocado Smart Platform for use internationally. The deal will result in multimillion pound investment by Tharsus in its Blyth premises and secure more than 100 jobs.

Just how high the competitive stakes are in robotics development was highlighted last month when Norwegian technology and robotics manufacturing company AutoStore announced it was taking legal action in the UK and US to try to bar Ocado and Tharsus from manufacturing, importing, using and selling technology which, it claimed, infringes on its patents.

AutoStore, which is seeking monetary damages too, also argues that some patents important to the Ocado Smart Platform are based on AutoStore intellectual property and wants them reassigned to itself.

Ocado says any suggestion it has taken AutoStore’s IP is “absurd” and that it will continue to defend Ocado’s IP “by whatever means necessary”.

Mr Palmer says the AutoStore action was not having any immediate impact on his company. “It’s business as usual.”

Another timely Tharsus focus is agritech; the pandemic and a shortage of agricultural workers have boosted interest in farm robotics and automation, bringing talk of a revolution in harvesting, spraying and irrigation and a surge of investment. It is working with agritech leaders including UK-based Small Robot Co and Norway-based Saga.

The Tharsus customer list includes Rolls-Royce, DHL, robot developer Automata, BMW and Cambridge Medical Robotics. While partnership working means it mostly does not own the IP, Bump is entirely its own. The board committed £2.5 million to its development. “It demonstrates we have the self-confidence, despite the world being very chaotic, to invest in this,” says Palmer.

Bump, a recent winner of a Royal Academy of Engineering Special Awards for Pandemic Services, has great sale prospects. It is also, he says, a “very good way of opening doors” to strategic partnerships.

Recent years have seen rapid growth for Tharsus; turnover will be £85 million this year with profits growing in line with this turnover increase. From 71 employees in 2010, it now has 405.

Tharsus’s customers, suppliers and ambition are global. But Palmer, Newcastle-born and bred, retains a commitment to his home area. Although the pandemic means planned hiring in 2020 has been cut from 140 to 90, recruiting under-24s carries on for social as well as business reasons. “I feel we have a moral duty to continue with apprentices and graduates.”

But he is emphatically not parochial, bringing in people with international business experience to senior positions to drive continuing growth.

He has no wish to involve private equity. “None of the senior management team are here just to get into the PE spin cycle,” he says. His focus is on building something sustainable.

Technology may mean constant change, but people’s need for employment and a sense of purpose endures. “I find it more motivational to be trying to create a regional legacy,” he says. “We’re creating a business to be here for the long term.”