Kainos predicts further growth as it reports doubling of profits 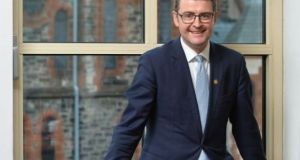 Kainos chief executive Brendan Mooney: “Against the backdrop of Covid-19, we recognise that our strong business performance during this period has been a result of the hard work and flexibility of our people, and the support and trust of our customers”

Pretax profits at Northern Ireland software company Kainos doubled to £24 million (€26.7m) in the first half of the year as revenues rose 23 per cent to £107.2 million from £86.9 million for the same period a year earlier.

Kainos, which provides digital technology services and platforms to customers that include the National Health Service (NHS), was established in 1986 as a spin-out company from Queen’s University Belfast. It employs over 1,700.

Shares in the FTSE 250-listed company opened 3 per cent higher in London on Monday.

Revenue growth in digital services rose 16 per cent in the first half to £71.4 million, while turnover at its Workday practice increased 41 per cent to £35.8 million.

International revenues grew 54 per cent to £27.6 million, while healthcare sales jumped 73 per cent to £18.8 million.

The company said its contracted backlog continues to underpin further revenue growth, rising 38 per cent to £180.9 million in the six months.

The gross margin increased to 52.1 per cent from 46.5 per cent due to reduced expenditure on costs. Cash at the end of the reporting period was £62 million.

“Against the backdrop of Covid-19 we recognise that our strong business performance during this period has been a result of the hard work and flexibility of our people, and the support and trust of our customers,” said Mr Mooney.

The number of people employed at Kainos rose 11 per cent to 1,729 versus the same six months a year earlier despite recruitment having been temporarily put on hold during during the early days of the Covid crisis.

“Notwithstanding the uncertainty generated by Covid-19, we believe that by concentrating on the needs of our colleagues and our customers we are well positioned for further growth,” said Mr Mooney.