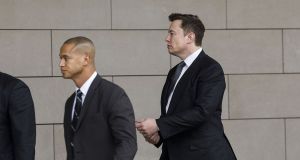 Tesla chief executive Elon Musk will have to go before a federal jury and defend calling a British caver a “pedo guy.” Photograph: Bloomberg

It all boils down to what, exactly, Elon Musk meant when he called a British cave explorer “pedo guy.” In a Los Angeles court on Tuesday, Mr Musk and his legal team sought to play down that remark, saying he wrote it on Twitter last year in the heat of the moment after the explorer, Vernon Unsworth, colourfully dismissed his attempts to help rescue a group of trapped children in Thailand.

Lawyers for Mr Unsworth, however, argued that Mr Musk, billionaire chief executive of Tesla, was using his platform to damage the explorer’s reputation and paint him as a paedophile.

Those were among the opening volleys in the trial of Mr Unsworth’s defamation suit against Mr Musk.

In his opening statement, Mr Musk’s lawyer, Alex Spiro, characterised “pedo guy” as a generic insult and an expression from Mr Musk’s youth in South Africa. “These are joking talking tweets in a fight between men,” Mr Spiro said.

Mr Musk added in his testimony: “‘Pedo guy’ is used in other countries also. It’s quite common in the English-speaking world. I’m quite confident if you do a search, it will just say ‘creepy old dude’.”

Mr Unsworth’s lawyer, Lin Wood, aiming to show that Mr Musk had instead implied that Mr Unsworth was a paedophile, cited a tweet in which Mr Musk wrote, “Bet you a signed dollar that it’s true.” Mr Musk countered on the stand that “if I really thought it was true, I would have sent more than a dollar.”

The trial stems from a war of words that took place between the two men in the summer of 2018 as they raced to offer assistance to a youth soccer team that had been trapped by rising waters in a cave in Thailand, an ordeal that transfixed the world.

Mr Unsworth, who said in court documents that he had been exploring that cave system for six years, quickly became involved in the rescue effort. Soon after, Mr Musk sent a team of engineers from the companies he leads, including Tesla, SpaceX and the Boring Co, to help as well.

At the time, Mr Musk suggested the use of a small submarine, which Mr Unsworth brushed off in a CNN interview, saying Mr Musk could “stick his submarine where it hurts”. Mr Musk fired back in a series of angry tweets, referring to Mr Unsworth as “pedo guy.” He later deleted the tweets, explaining that they were issued “in anger after Mr Unsworth said several untruths & suggested I engage in a sexual act with the mini-sub”.

Mr Musk passionately engages with fans and critics alike on Twitter, where he has 29.8 million followers. But tweets have backfired on him in the past. Last autumn, for example, he was replaced as chairman of the Tesla board as part of a settlement with the Securities and Exchange Commission over a tweet in which he said the company had the funding to go private.

And despite deleting the offending tweets about Mr Unsworth, Mr Musk continued to attack him using information from a private investigator who had contacted Mr Musk to suggest that the explorer had “skeletons in his cupboard”, the billionaire’s lawyers said in a September court filing.

BuzzFeed later reported that the investigator had been convicted of fraud and spent 18 months in a British prison for stealing hundreds of thousands of dollars from a business he co-founded.

In a court filing on Monday, Mr Musk’s lawyers appeared to lay the groundwork for a First Amendment defence, arguing that the jury should be instructed to determine whether Mr Musk’s words qualified as statements of fact or merely opinion. The lawyers also argued that Mr Unsworth is a public figure rather than a private one, a distinction that would make it more difficult to prove defamation. The judge had already said last month that Mr Unsworth is a private figure.

Neither Tesla nor SpaceX responded to requests for comment, and Mr Spiro declined to comment. On the stand on Tuesday, Mr Musk lamented the turn of events.

“It should’ve just been ‘Here’s a rescue, and that’s great’,” he testified. He added, “I apologised, deleted the tweets, and I apologise again to Mr Unsworth.” – New York Times service