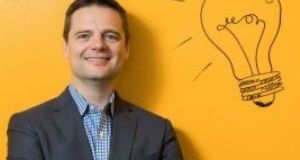 Workhuman co-founder and chief executive Eric Mosley. The company announced a 32 per cent rise in revenue to $452 million (€410 million) for 2018.

Irish-founded software company Workhuman is in talks to bring its HR-focused annual conference to Europe.

Workhuman, which is co-headquartered in Massachusetts and Dublin, recently rebranded from Globoforce due largely to the unexpected success of the four-day conference, which began in the US four years ago.

Workhuman co-founder and chief executive Eric Mosley told The Irish Times the company was finalising plans to hold the conference outside of the US for the first time with Dublin a likely venue.

“We’ve now thousands of HR professionals converging on our annual conference to talk about how to make the workplace better. It has become so popular that the Workhuman brand became bigger than us, which is why it made sense for us to adopt the name,” Mr Mosley said.

“We have been having a lot of discussions about bringing the conference to Europe and I think the time is right for it as there is a strong appetite there. We’re looking at announcing something in the first quarter and obviously Dublin would be in the running to host it.”

The company reported another strong performance last year that has continued into 2019 with Workhuman on track to post turnover of more than $700 million.

“We grew 30 per cent last year and for the first half of 2019 it was the same so we’re doing extremely well,” he said.

Founded in Dublin by Mr Mosley and Eddie Reynolds in 1999, the company operates employee reward and incentive schemes on behalf of some of the world’s biggest companies, Clients include Biogen, Cisco, GE, Eaton, LinkedIn, Procter & Gamble, Symantec, JetBlue Airways, and KPMG.

Workhuman announced 150 new jobs in the Republic earlier this year as part of a €4 million expansion of its Dublin hub. It employs more than 550 staff across the US and Ireland.

“In 2018 we won a record 55 new customers on back of increased interest in this area. New clients included Dell, Merck and Schneider Electric, all of whom have over 100,000 employees each. Overall, we’ve now more than 4.5 million employees on our platform in over 150 countries,” Mr Mosley said.