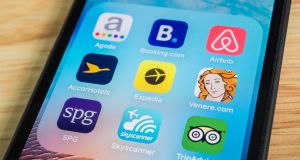 Expedia has been investing resources into its home-sharing division, Vrbo, to challenge rivals Airbnb and Booking Holdings in the booming market for alternative accommodation. Photograph: iStock

Barry Diller, board chairman, and vice chairman Peter Kern will take charge while the board looks for long-term leadership.

“Ultimately, senior management and the board disagreed on strategy,” Mr Diller said in a statement Wednesday.

Earlier this year, Expedia undertook an “ambitious reorganisation plan”, aiming to bring its various brands and technology together in a more efficient way. Mr Diller said the move, “while sound in concept, resulted in a material loss of focus on our current operations,” leading to disappointing third-quarter results and a lackluster near-term outlook. The board disagreed with that outlook, Mr Diller said, “strongly believing the company can accelerate growth in 2020”.

Mr Diller said he will buy additional shares in the company as a “tangible sign of my faith in and commitment to Expedia’s long-term future”. The stock jumped as much as 10 per cent in New York, the most intraday in about a year and a half, to $109.32 (€98.45).

Expedia has been investing resources into its home-sharing division, Vrbo, to challenge rivals Airbnb and Booking Holdings in the booming market for alternative accommodation. Expedia has struggled recently, especially in the third quarter when earnings missed Wall Street’s expectations. The company largely blamed Google, which has been cramming the top of its search results with more advertising, pushing down free listings from travel companies and forcing them to spend more on marketing.

Mr Okerstrom said last month that Expedia now sees 2019 adjusted earnings before interest, taxes, depreciation and amortisation growth of 5 per cent to 9 per cent, down from a previous forecast for as much as 15 per cent growth.

Jake Fuller, an analyst at Guggenheim Securities, said “it sounds to us like Okerstrom-Pickerill may have been getting ready to drop a disappointing 2020 Ebitda guide.” Mr Fuller cut his Ebitda growth estimate to unchanged from a gain of 5 per cent earlier this week. “We are left to wonder whether the two were pitching something worse than that to the board.” – Bloomberg