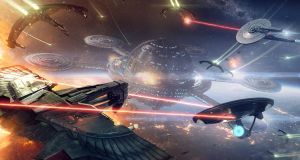 ‘Star Trek Fleet Command’ is available for Android and iOS devices, and set in the Kelvin timeline of the long-running series.

Dublin-based game developer Digit Games Studio is officially releasing its Star Trek-themed mobile game, a product that was created and built in Ireland.

The game, which took three years to make and is published by Scopely, is a multiplayer online strategy game that puts players in the middle of a galaxy on the verge of war.

Star Trek Fleet Command is available for Android and iOS devices, and set in the Kelvin timeline of the long-running series. Players will find and interact with familiar characters from the most recent movies as they build up their own star base, create and carry out missions.

Digit boss Richard Barnwell said it was impossible to say how many people would begin playing it, but it was anticipated that millions would pick up the game in its first week.

“We’ve brought that entire universe on to mobile in a way that has never been seen before,” he said.

The free-to-play game is designed to be hugely immersive, and although there are in-app purchases, Mr Barnwell said it was designed to encourage people to play for longer, with some elements taking time to unlock before being made available for purchase. There are hundreds of thousands of gameplay possibilities, he said, with Digit viewing the game as a five-year plus project.

“It’s an incredibly innovative piece of technology for mobile. It’s much akin to a PC-type hardcore experience.”

There is also an augmented reality feature that lets players bring the starships they earn in the game into the real world and take photographs.

The game was launched to a test audience, with about 100,000 players in Australia and selected European countries accessing the game.

1 Admission of mistake in Oxford vaccine dose raises doubts over reliability
2 Cliff Taylor: Deal or no deal we are now heading for a hard Brexit
3 Move to EU or face disruption, City of London is warned
4 Last orders for Rí-Rá and Globe as Central Hotel gets green light to expand
5 Irish Life fund pays €49m for 94 Dalkey apartments
Real news has value SUBSCRIBE