Amazon to open up machine-learning algorithms to Web Services customers 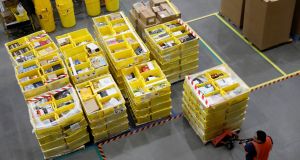 Amazon, where algorithms make the world go round. Photograph: Reuters

Amazon is set to open up the machine-learning algorithms that power its recommendations and forecasts to Amazon Web Services customers in a bid to make it easier to adopt the new technology.

In a keynote speech that referenced Fortnite, the Beatles, Elvis Presley, the Clash and Queen, chief executive Andy Jassy announced a total of 20 new products and services that it would allow its customers to use the company’s smart technology to get started in machine learning, making it easier for its customers to get started and customise the new technology to meet their needs.

Amazon Web Services laid out its plans to grow its cloud services business, adding new tools and services that would make it easier for companies to manage their data in the cloud. The company, which announced earlier this year that it would create 1,000 jobs in Dublin, said it would make it easier for companies to make use of the data they had collected over the years. Announcing Glacier Deep Archive, AWS took aim at old-school data storage methods, offering companies storing little-used data on tape a cost effective way to keep it safe and also provide access when needed.

“If you are managing your own tape libraries on premises, it’s a lot of effort,” said Mr Jassy. “Companies are wanting to make use of data like they never have before. There is a lot of learning in that data and that historical data that you want to reside with the rest of your data, and run your analytics and machine learning on that data.”

“Customers have asked us specifically to support file systems with native windows features, and that’s the biggest driver for FSx,” said Steve Schmidt,

Mr Jassy also unveiled an autonomous model car AWS DeepRacer and a racing league that will see races take place at 20 AWS summits during the year before the DeepRacer Cup event at AWS Re:Invent in 2019.

The seventh year of the conference is hosting 53,000 people in Las Vegas, with a further 100,000 expected to view it through its live stream.