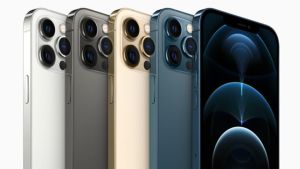 ‘If you have smaller than average hands, the 12 Pro Max will be a stretch, in every sense of the word.’

We were spoiled for choice this year when it came to new smartphones. And Apple got in on the act by not only releasing its usual new iPhone, but by offering us a choice of four different models.

There is a lot of crossover. They all have the A14 Bionic chip, which is Apple’s newest and fastest chip to date. All the phones were made to run iOS 14, and they share a common design, albeit in different sizes. They all support Apple’s newest charging standard, MagSafe, which magnetically attaches the charger to the back of the phone, making sure you can’t accidentally knock the phone off the charger’s sweet spot.

There’s the extra screen space for a start. If you plan on doing work or photo and video editing with the iPhone on a regular basis, you may appreciate the extra space that the iPhone 12 Pro Max brings. It has a 6.7 inch OLED screen, which on paper seems huge but given that Apple has shrunk down the bezels on the phone, it’s not as unwieldy as it could be. That screen is bright too, at 800 nits.

It’s not a subtle phone though. If you have smaller than average hands, the 12 Pro Max will be a stretch, in every sense of the word. It’s almost impossible to use one-handed, even with the shrunken keyboards aimed at one-handed use, because balancing it while you type is almost impossible. Finding a pocket to fit it in comfortably may be more of an issue, however.

But once you get used to it, the 12 Pro Max can be an invaluable device. Not only does it have enough screen space for you to comfortably work on the move - when we eventually need to do that again - but it also has one very good bonus: its battery. Big screens mean big batteries, and the 12 Pro Max has a bigger than average power source. It’s not the biggest battery Apple has crammed into a phone - the 11 Pro Max beats it - but with a combination of more efficient hardware and software, the end result is a battery that you won’t have to charge part-way through the day.

Not only does the Pro Max have the size advantage over its stablemates, but it also has a better camera. The differences, mind you, are subtle and probably not something that most people will miss. But they are there. For example, the optical zoom tops out on the 12 Pro at 4x, but the Max pushes it to 5x. It’s a small difference, but it means you can get that bit closer to your subject without having to rely on digital zoom, and makes for better photographs.

The camera combines an f/1.6 aperture wide camera with a larger sensor and bigger pixels that means you get better low light performance than before. Put it side by side with the 11 Pro’s video camera and you’ll see a noticeable improvement. Apple has also included the ability to take portrait shots at night, getting that nice bokeh effect and blurring the background. That’s not exclusive to the Pro Max, as it appears in the 12 Pro too, but it’s a useful addition to the camera.

One thing that is exclusive to the larger device is sensor shift technology, a type of image stabilising technology that is applied directly to the lens when you are recording video. That means more stable video, and when you team it with the Dolby Vision and camera improvements that the 12 Pro Max has, the end result is some professional looking video.

The 12 Pro Max has plenty of good points: a large, bright screen; great battery life and excellent camera. Does that outweigh the extra bulk, even if it is nicely designed? Perhaps. It all depends on your point of view.

Everything about the iPhone 12 Pro Max is big, including the price. If you want a phone that’s easy to stash away, this isn’t it.

The Max, like the other iPhone 12 devices, has an IP68 rating, withstanding water submersion up to 6 metres for up to 30 minutes. It also supports MagSafe charging, which will require investing in new chargers and new cases that allow Apple’s technology to work.

If big phones are your thing, then the iPhone 12 Pro Max is a must-have.