Fintech takes top prize with other winners including City Swift, NearForm and Fineos 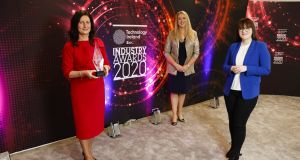 Fast-growing financial software firm Fenergo has been named company of the year at the annual Technology Ireland awards.

Other award winners at the virtual event were Swift Comply, Fineos, City Swift. TEKEnable, VMware, AWS, Microsoft and Waterford-based NearForm, whose Covid-19 tracker app technology has been widely adopted outside of the Republic.

The annual awards, now in their 28th year, seek to highlight successful entrepreneurship and the diversity of the Irish technology sector.

Fenergo, which was also shortlisted for the technology innovation award, develops solutions for financial institutions that helps them with issues such as regulatory compliance and managing client data. Its customers include BBVA, RBS, Bank of China, UBS and State Street.

The fintech, which in recent years has also expanded into new sectors such as asset and wealth management, closed an $80 million investment round in February to give it an $800 million market valuation. The company is reportedly weighing up a potential $2 billion initial public offering (IPO).

Fenergo took the top prize at this year’s awards head of Financial Risk Solutions, GridBeyond, MyComplianceOffice and Fineos. The company was shortlisted for the top prize last year.

City Swift, a start-up that provides data-driven scheduling and planning technology for public transport companies, won the innovation of the year award. Swift Comply, which has developed a platform to help restaurants and food outlets easily abide by regulations, was named emerging company of the year.

The person of the year award went to Edel Creely, who co-founded Trilogy Technologies and is now managing director of Arkphire Services.

“The quality of applications this year was extremely high, showing the strength and diversity of how Irish companies are competing in international markets and growing even under the constraints of Covid,” said David Byrne, one of this year’s judges and the manager for digital technologies at Enterprise Ireland.