€12bn of €14.9bn funnelled through Netherlands comes from Irish subsidiaries 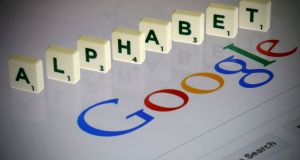 Some €12 billion of the money funnelled through the Dutch company in 2015 came from Google Ireland Limited, which collects most of Google’s international advertising revenues. The rest came from a Google subsidiary in Singapore that serves a similar role.

The Dutch company then transfers this money on to Google Ireland Holdings Unlimited, which has the right to license Google’s intellectual property outside the US. That company is based in Bermuda, which has no corporate income tax. The use of the two Irish entities is what gives the structure its “double Irish” moniker.

The amount the company shifted through its Dutch subsidiary, Google Netherlands Holdings BV, and then on to a Bermuda mailbox was 40 per cent greater than in 2014, according to filings the company made with the Dutch Chamber of Commerce on December 12th and which were made available online on Tuesday. News of the filings was first reported by the Dutch newspaper Het Financieele Dagblad.

Alphabet moves the bulk of its non-US profits through this Dutch subsidiary, which has no employees. The company has used the Netherlands company since 2004 as part of a tax structure dubbed a “double Irish” and a “Dutch sandwich.”

By moving most of its international profits to Bermuda, the company was able to reduce its effective tax rate outside the US to 6.4 per cent in 2015, according to Alphabet’s filings with the US Securities and Exchange Commission (SEC).

“Google complies with the tax laws in every country where we operate,” a Google spokesman said in a statement. In February, Google also said such calculations of an effective tax rate do not reflect the methods actually used to determine its international taxes in any jurisdiction.

The total amount of profit Google had sheltered from US taxation, most of which passes through its Dutch subsidiary en route to Bermuda, grew to $58.3 billion in 2015, according to Alphabet’s SEC filings.

The government closed the tax loophole that permitted “double Irish” tax arrangements in 2015. Companies already using the structure, however, are allowed to continue employing it until the end of 2020.

Google is under pressure from regulators and tax authorities around the world for not paying enough tax. On Tuesday, Indonesia set a December 31st deadline for Google to resolve a tax dispute there, including a possible $223 million fine. The company’s offices in Spain and France have also been raided by tax investigators in the past year.

US president-elect Donald Trump has discussed possible changes to US tax laws in order to allow American companies to repatriate foreign profits at a one-time tax rate of 10 per cent. That would eliminate some of the incentive US companies currently have to hold foreign profits outside the US. Tech firms have some of the largest such stockpiles, with Apple holding $181 billion outside the US and Microsoft holding $94.4 billion, according to their 2015 annual SEC filings.