Linux is everywhere – and will free your computer from corporate clutches 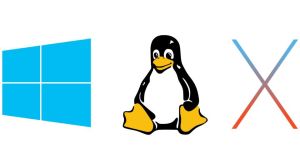 Rival operating systems: most people are too busy to look beyond Windows (left) and macOS (right), but Linux (centre) is worth making time for

I have bid farewell to Apple for the same reason I abandoned Windows 15 years ago: when it comes to computers I like control and crave the quiet life.

It was 2002, I was up against a deadline and a bullying software bubble popped up in Windows every few minutes. Unless I paid to upgrade my virus scanner – now! – terrible things would happen.

In a moment of clarity I realised that the virus scanner – and its developer’s aggressive business model – was more of a pest than any virus I’d encountered. Microsoft’s operating system was full of this kind of nonsense, so, ignoring snorts of derision from tech friends, I switched to the Apple universe.

It was a great choice: a system that just worked, designed by a team that clearly put a lot of thought into stability and usability. Eventually the iPhone came along, and I was sucked in farther, marvelling at the simple elegance of life on Planet Apple and giving little thought to the consequences.

Then the dream developed cracks. My MacBook is 10 years old and technically fine, particularly since I replaced my knackered old hard drive with a fast new solid-state drive. So why the hourly demands to update my Apple operating system, an insistence that reminded of the Windows virus scanner of old?

I don’t want to upgrade. My machine isn’t up to it, and I’m just fine as I am. But, like Microsoft, Apple has ways of making you upgrade. Why? Because, as a listed company, it has quarterly sales targets to meet. And users of older MacBooks like me are fair game.

I looked at the price of a replacement MacBook but laughed at the idea of a midrange laptop giving me small change from €1,200. Two years after I de-Googled my life (iti.ms/2ASlrdY) I began my Apple prison break.

Linux is the umbrella term for a family of open-source operating systems. Its common core, the Linux kernel, was programmed by a Finn, Linus Torvalds, in 1991. Today Linux is everywhere, with modified versions in various operating systems – macOS, Android, google. com/chromebook/">Chrome – or running countless corporate networks and government servers.

But Linux has a tiny market share on home computers – less than 3 per cent worldwide – and a reputation for being the preserve of cranky techie contrarians. That preconception only grew when, seeking answers, I sought out Berlin Linux User Group, or BeLUG.

Some versions of Linux are like hard-core Presbyterian churches, offering beginners little comfort and much suffering on the road to salvation

Crowded into the back room of an abandoned store in Berlin, its members were straight out of tech-support central casting. Watching them tinker happily with their laptops, I had an inkling of why Linux isn’t more popular: its hard-core devotees are too busy lurking, unwashed, in their digital man cave.

Anxious to get out again, I asked which of the many Linux versions (so-called distributions) was best for my needs as a casual user – and unwittingly sparked a religious war. Linux, I learned in the ensuing crossfire, is a faith community with various churches (Debian, Suse, Fedora) and true believers. Some versions of Linux are like hard-core Presbyterian churches, offering beginners little comfort and much suffering on the road to salvation. But the most popular distributions, called Ubuntu and Mint, are more Anglican high church, professing a clear line on self-responsibility but without the whiff of sulphur.

No matter which Linux church, all profess the same faith in the open-source software security blanket: leaving code open to inspection by all ensures virus- and ransomware programmers have nowhere to hide.

My experiment began gradually. A Linux-loving neighbour encouraged me to take the plunge on a second-hand ThinkPad laptop from a Berlin store that sells old corporate stock. At €250 for a solid device I had little to lose. After a bit of trial and error (see below), I installed Linux Mint, amused and comforted by its low-fi, retro-Windows look and feel.

What makes Mint a pleasant experience for beginners is the way, to the annoyance of some Linux purists, the installation includes often crucial, additional (proprietary) software to get your internet router or printer working quickly. Which is nice.

Whatever version of Linux you install, however, booting it for the first time is a blast. Soon you’re zipping through the internet at warp speed – Linux is fast – on a Windows- and Apple-free laptop that feels like a hot-wired car.

My transition was less harsh than I feared. I can’t remember the last time I used Microsoft Word, as the open-source LibreOffice does everything I need. My favourite web browser, Firefox, allows you to sync bookmarks and browsing history across devices, so that was another problem sorted. Firefox’s email cousin, Thunderbird, is no beauty, but it gets the job done. And if, like me, you do little more than this on your computer, Linux is a no-brainer.

Apple and Microsoft have gone the way of the car industry: your big purchase from them is now the start, not the end, of the transaction

It is about choice. It’s completely understandable that many people are too busy – or don’t wish – to look beyond the offerings of Microsoft and Apple. These are smart companies that have changed the world with their excellent products. But their business models have developed quicksand characteristics.

From the subscription-based Microsoft Office to the walled garden that is iTunes and iCloud, Apple and Microsoft have gone the way of the car industry: your big purchase from them is now the start, not the end, of the transaction.

The recent Panama Papers and Paradise Papers revelations only hardened my resolve to part company with Apple rather than bankroll its creative tax planning.

A year on, my office computer is still humming along happily on Linux Mint. In fact I’m so satisfied that I have taken the final plunge and replaced my home computer with a Linux system as well.

Stage two of my prison break is more daunting: extracting my photographs and music from Apple corporate tentacles that are golden, beguiling and very sticky. But like the Church of Scientology and the Hotel California, the difficulty of leaving Planet Apple has only made me more determined to complete my leap into Linuxland.

Why should I bother with Linux? Do you just need a computer that does the basics? Are you sick of being trapped in some company’s hardware-software upgrade cycle? Has your computer magically slowed down of late, or stopped working entirely, although there is technically nothing wrong with it? Are you worried about viruses or ransomware? If you answered yes to any of the above, Linux may be for you.

How do I get started? First decide which version of Linux you want. For Windows and Mac refugees the most popular, user-friendly versions are called Mint and Ubuntu, although there are dozens of other distributions, or “distros”, with loyal fan bases. Read around online, then back up your hard drive – twice.

How do I install Linux? The easiest way is the free DVD-Rom on Linux magazines. No optical drive? Download an ISO-burner program (try Rufus on Windows) to create a bootable USB stick. The second, fiddly part is telling your computer’s Bios, or startup, software to boot from the DVD or USB ahead of the hard drive. After some trial and error you’ll clear the Bios hurdle and the Mint/Ubuntu installers will kick in smoothly. If in doubt, follow online tutorials.

Where do I install it? If you’re adventurous create a separate Linux partition on your existing (backed up!) hard drive and install it there. But be warned: I tried that and broke my MacBook. (Have I mentioned backups?) So consider a separate laptop, from your electronics graveyard under the stairs. Linux is environmentally friendly: happy to run on old hardware destined for the landfill.

Do things run smoothly? Mostly, and you soon learn to roll with the hiccups, for which there is almost always an answer online. Solving problems yourself boosts your confidence and helps you understand Linux more, like changing your car’s tyres or oil. If in doubt you’ll find experienced Linux users online to assist. Even if you need to spend money on a tech wizard to get you up and running, remember: you’ve spent nothing on the operating system, and you won’t be upgrading hardware for a long time. Once it’s running, Linux beats even the Duracell bunny into submission.

Today is international Linux presentation day, with introductory events across Europe; int.linux-presentation-day.org; the next meeting of Dublin Linux User Group is at 3pm on Saturday, November 25th, upstairs at the Long Stone pub; dlug.ie