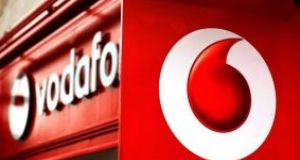 Vodafone Ireland, which has over 2.3 million customers, said its subscriber base rose by 4,000 versus the first quarter

Vodafone Ireland recorded a 1.7 per cent rise in service revenues to €234.3 million in the second quarter on the back of a rise in fixed broadband and mobile users.

However, once the impact of regulatory changes including roaming and mobile termination regulations are added in, the State’s largest mobile operator said organic revenues declined 2.8 per cent.

Vodafone Ireland, which has more than 2.3 million customers, said its subscriber base rose by 4,000 versus the first quarter. It now has 265,400 fixed broadband customers, up 3.4 per cent year-on-year, and making it the fastest growing broadband provider in Europe within the Vodafone group.

“Vodafone Ireland delivered another strong performance in the last quarter with continuing growth in both fixed and mobile. Growth is being driven by our ongoing investment in our 4G network, on innovative new technologies and in our continued work in ensuring that we provide an unrivalled customer experience across all of our platforms,” said chief executive Anne O’Leary.

The company had to credit more than €2.5 million last month to some pay-as-you-go customers who were automatically opted into its ‘Red Roaming’ package earlier this year ahead of the introduction of new ‘Roam Like at Home’ regulations. It was also fined €250,000 by the communications regulator ComReg over the manner in which it signed up customers to the service.

Its parent, the world’s second-largest mobile operator, raised its forecast for full-year earnings growth to around 10 per cent, from 4-8 per cent, on Tuesday after reporting a strong first half helped by demand for data and broadband in Europe.

The company reported a 13 per cent rise in first-half organic adjusted core earnings to €7.4 billion, ahead of market forecasts for €7.08 billion.

The company said the increased forecast, which implies core earnings of €14.75-€14.95 billion, reflected stronger than expected underlying revenue growth in Europe and a later than anticipated launch of a new entrant in Italy.

It said free cash flow would also beat its previous expectation, coming in above €5 billion rather than around €5 billion. – Additional reporting: Reuters

Stocktake: Markets shrug off Capitol riot 05:00
Does Green Reit buyer have tax-back case? 04:51
Northern Ireland tech companies raise record £45.6m in 2020 04:42
Complaint made against ESB over purchases of coal from Colombian mine 04:30
Students get almost 17,000 laptops in online learning scheme 04:10