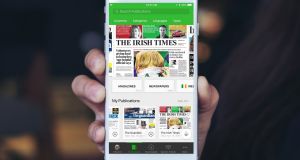 Publications available on the PressReader platform include The Irish Times

PressReader, a digital-newspaper and magazine distribution service that has seven million monthly active users globally, has been busy snapping up corporate customers in the hospitality service in Ireland as it looks to expand its footprint locally.

The Canadian company, which officially opened its offices in Dublin on Thursday, recently announced plans to create 65 roles here over the next few years.

Speaking to The Irish Times, Ruairi Doyle, who was recently appointed as general manager to establish and scale PressReader’s local operation said it was making good progress in securing clients in Ireland.

He said many 5 star hotels including The Shelbourne, The Marker, Adare Manor, the K Club and Ashford Castle, were offering PressReader as a complimentary service to guests. The company provides its service to 10,000 hotels globally and has recorded double-digit growth in the hospitality sector over the last few years.

Earlier this month the company launched a partnership with Cathay Pacific to bring the service to its 34 million customers.

PressReader is a Netflix-like platform that allows people to access over 7,000 newspapers and magazines across 120 countries and 60 languages. Publications available on the platform include The Irish Times, The Washington Post, The Guardian, Le Monde, Bloomberg Businessweek, Popular Science, Cosmopolitan and Country Life.

While PressReader is primarily focused on providing its service to businesses, who in turn offer it to their clients, consumers can also sign up for a monthly subscription at a cost of €24.75 a month.

PressReader was established in 2003 in Vancouver. The Irish operation, which has responsibility for all territories outside North America, currently employs five people. It is now hiring a number of data engineering and machine learning specialists.

“With over 7 million active monthly users interacting with more than 7,000 publications we have very large datasets in terms of what content is engaging the public. We’re looking to analyse that data to identify real-time personalisation and recommendation opportunities to readers,” said Mr Doyle.

“Now is an interesting time for the publishing industry. if you look at Spotify and Netflix then it is obvious that subscription content is becoming normalised but it is really about finding a sweet spot in terms of finding pricing that appeals to both publishers and consumers,” he said.

“We do see potential growth in the B2C space but our main focus for now is on helping businesses provide access to content,” Mr Doyle added.

Britain after Brexit will not be alone, but it will be lonelier 10:17
Election 2020: Parties' pledges on housing simply don’t add up 09:45
First-time buyers drive growth in mortgage values and volumes 09:20
Ryanair accepts four-year labour agreement with Irish pilots 08:48
Coronavirus shuts down Starbucks, Toyota and BA 08:13