Siemens to cut about 6,900 jobs and close at least two sites 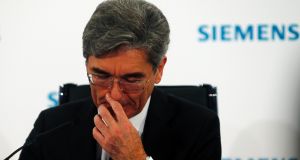 Siemens chief executive Joe Kaeser pushing ahead with broader changes in the structure of the company.

Siemens AG is planning to cut about 6,900 jobs and close at least two sites as Europe’s biggest engineering company attempts to turn around its struggling power and gas division after a sharp drop in orders.

Half of the 6,900 jobs being eliminated will be in Germany, the Munich-based company said in a statement on Thursday. Some 6,100 of the jobs will be cut in the power and gas division, with the rest coming in the process-industries-and-drives and power-generation divisions.

The company’s Goerlitz and Leipzig sites are slated to be closed, while the solutions business of the Offenbach and Erlangen locations will be combined. Options are still on the table for a location in Erfurt, including a sale, Siemens said in the statement. About 640 jobs will be cut at a site in Muellheim, and another 300 in Berlin.

“The cuts are necessary to ensure that our expertise in power-plant technology, generators and large electrical motors stays competitive over the long term,” Janina Kugel, chief of human resources at Siemens, said in the statement.

The sweeping cuts are the biggest in over two years and come as Siemens chief executive Joe Kaeser pushes ahead with broader changes in the structure of the company.

The reduction falls the same week as rival General Electric unveiled its own turnaround plan to focus on three businesses and exit others. Both conglomerates are facing global shifts in energy demand favouring renewables over large fossil-fuel plants powered by the types of turbines they manufacture.

Siemens’s last major round of cuts was in the process-industries division, where 1,700 positions were cut after negotiations with unions. Kaeser warned last week the latest round would be “painful.”