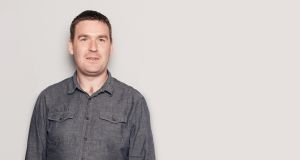 Intercom co-founder Des Traynor: ‘We want to keep going in Ireland and are continuing to hire as much as we can locally’

Des Traynor is looking remarkably relaxed for a man who has just gone through what most public speakers would consider hell.

A technical glitch has meant he almost had to deliver a full presentation on stage at Web Summit without any slides and to a packed audience. Ever the professional, Traynor gives a confident speech that goes down well.

In fairness, the Intercom co-founder and its chief strategy officer is comfortable talking to a crowd. The Irish software firm’s roadshows, where various employees outline how they’ve built their products and scaled the company, have become the stuff of industry legend. With sold-out performances at venues such as the SF Jazz Center in San Francisco, the roadshow is at Vicar Street in Dublin later this month.

It might seem bizarre that a tech firm is capable of selling out venues more used to hosting bands, but the reality is that there are plenty who want to hear Intercom’s story.

Established by Traynor, Eoghan McCabe, Ciarán Lee and David Barrett in 2011, the company has developed a software platform which brings messaging products for sales, marketing and customer support together. Its products allow companies to communicate with customers easily through their own websites, inside their respective web and mobile apps, and by email.

Intercom’s platform has been widely successful with the firm having signed up more than 20,000 paying customers for its services, including Microsoft, IBM, Spotify and Shopify. Its annual recurring revenue (ARR) – a measure of revenue based on subscriptions – passed $50 million (€43 million) last year and it currently claims some one billion end users with customers spread across 117 countries and six continents.

As with many tech firms, Intercom’s first customers were largely fellow start-ups but in recent years, it has increasingly snared some of the biggest companies in the world.

“We’ve become more accessible to larger businesses but the cool kids still use us,” is how Traynor puts it, speaking to The Irish Times a few minutes after coming off the stage.

The company, which employs more than 350 people (of which 197 are in Dublin) and has raised $116 million in funding, has been busy of late. It recently opened an office in London and launched two new products – Operator and Live Chat for Sales.

“We’ve very passionately against the idea that we’ll build things just because someone asks for them. A base fundamental axiom of Intercom is we don’t build stuff on demand to close deals. A lot of companies have gone down that route, sometimes accidentally. If you do that, though, then over time you turn into a consulting house,” he says.

“Companies of our size or smaller use Intercom for everything but the bigger ones like Microsoft don’t necessarily use us to communicate with all their customers. They find specific slices of value such as engaging with people who have signed up for a service and quit early. This is something that touches their revenue line very closely so they want to know why that person has stopped using them,” he says.

What Intercom does might seem complex but the idea behind it is pretty simple. The usual way for customers to communicate with companies in an online environment sucks. It is impersonal and a source of frustration for users.

Intercom’s mission is to make business a bit more personal. It has done this by enabling companies and their customers to communicate easily with each other in a less formal manner, akin to how many of us keep in touch with family members and friends. It seems to be working, with some 400 million conversations started on the firm’s platform each month.

“We have made it easy for companies to talk their customers, and we can deliver a lot of value either by preempting or optimising the customer experience,” says Traynor.

He notes that with more companies switching to a subscription business model, building a rapport and creating loyalty had become more crucial for firms.

“Most website businesses are now well designed and the software used mostly works. The final battleground then, and possibly the most important one, is the customer relationship. If you want one that is built on loyalty then that only comes through frequent positive interactions,” says Traynor.

Given that almost all businesses are now internet businesses then everyone is a potential customer for Intercom. Indeed Traynor notes it has enjoyed success in some areas it did not necessarily expect, such as with companies who have developed gambling or dating apps.

Text is by far still the dominant way in which we communicate. While other methods such as video and voice are becoming more popular, Intercom expects it will be some time before text is surpassed.

“We build our software with the assumption that everything will change so it isn’t hardwired into our heads that the message will always be text. However, there are still core biological problems that affect how we communicate including things such as the fact that people can read quicker than they can listen,” says Traynor.

“I think voice will grow but I don’t know if it will ever take over. There are times such as when you’re driving or cooking when your hands are busy but your mouth is free and it works great for then but it isn’t as flexible as text,” he adds.

Three of Intercom’s cofounders still live in Ireland and the company has remained loyal to its home country with much of its R&D carried out here. Traynor says the firm is continually looking to help grow the local ecosystem.

“We want to keep going in Ireland and are continuing to hire as much as we can locally,” he said.