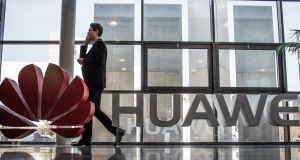 Europe has become a crucial battleground in a struggle between Beijing and Washington. Photograph: Ole Spata/EPA

The German government is debating whether to follow the United States and allies such as Australia in restricting China’s Huawei Technologies from accessing its next-generation mobile networks on national-security grounds.

Some Western countries have barred Huawei from their markets after US officials briefed allies that Huawei is at the beck and call of the Chinese state, warning that its network equipment may contain “back doors” that could open them up to cyberespionage. Huawei says such concerns are unfounded.

While no concrete steps have been decided upon, business daily Handelsblatt reported on Thursday that chancellor Angela Merkel’s administration was actively considering stricter security requirements and other ways to exclude Huawei.

Officials were discussing setting security standards that Huawei could not achieve, effectively blocking its participation. Changes to the German telecommunications law were also under consideration as a last resort, the paper said, citing government sources.

Europe has become a crucial battleground in a struggle between Beijing and Washington that analysts say could determine which of the two superpowers achieves technological supremacy in the 21st century. – Reuters