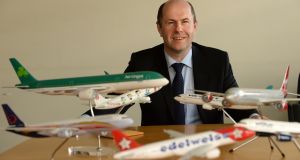 Shares in travel software firm Datalex plunged as much as 59 per cent on Monday as the group issued a surprise profit warning after concluding its figures for the first half of last year were misstated.

Sources say that the company, in which Dermot Desmond’s investment firm IIU is the largest single shareholder with a 26.3 per cent stake, his hired accountancy firm PwC to underake an independent review of the issue.

The company said on Tuesday that it would make a loss for 2018, revising its guidance after a shortfall in services revenue.

It said on Tuesday that it expected the loss to be between $1 million and $4 million. Chief executive Aidan Brogan said the company was confident it was a one-off.

The market value of the group plummeted by as much as 59 per cent to €78 million as investors digested the news.

Datalex said the fall in revenue was caused by a failure to recover by year end costs that had been incurred in the delivery of the services revenue component of a significant customer deployment. Negotiations regarding the recovery of a revenue shortfall were ongoing, the company said.

“A substantial element of the revised guidance reflects changes in the timing of recognition by the group of certain contracted revenue,” Datalex said in a statement. “Most of this revenue, not recognised in 2018, will be recognised in 2019 and 2020.”

Datalex said it was undertaking an independent review of the issue, but it believed it was principally down to in-year timining differences that would be corrected by the end of the year.

Mr Brogan said the announcement was “extremely disappointing” for him, the team at Datalex and the shareholders.

“For my part, I can assure all our stakeholders that we have already identified certain key areas that require improvement and are taking corrective action,” he said. “The fundamentals of the business remain strong. We are confident this is a once off and we will return to profitability in 2019.”

An update on its guidance for its 2019 fiscal year will be issued next month.