Broadband plan will deliver download speeds that are ‘too slow’ 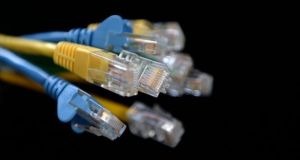 The backers of the €1.5 billion plus national Broadband plan have clashed with the chairman of the Public Accounts Committee Sean Fleming, after he cited internet speeds which he said would make the project a waste of time.

Mr Fleming told the Oireachtas Public Accounts Committee that correspondence from the Department of Communications cited download speeds of 30 Mbps and upload speeds of 6Mbps.

He said this was “not high speed by anybody’s definition in this century”. He said briefing notes from the department “kept referring to high speed broadband and we asked them to define what they mean by that”.

He said “if any of these figures are mentioned in any of the contracts, we are not getting the name on the tin”. In such a situation he said the national broadband contract “is a waste of space before we start.... that is only a waste of money in this day and age”.

However, the Department of Communications - which is charged with commissioning the National Broadband Plan - said Mr Fleming appeared to be quoting from minimum requirements in the initial tender specification.

A spokeswoman said the minimum speed offered by the bidders, including the last remaining bidder, would be 100Mbps.

“The solution proposed for the National Broadband Plan is predominantly fibre to the home which will allow speeds of at least 100Mbps in all premises and is capable of much higher speeds” she said.

“The technology is also future proofed and will be able to adapt to new technology as it develops” she added.

Commercial broadband providers currently advertise speeds of 100Mbps, 360 Mbps and even 1,000 Mbps in some cases.

The National Broadband plan has been estimated to cost anywhere between €1.5 billion and €3 billion, Last year, then minister for communications Denis Naughten resigned in a row over the broadband contract after it became known he had a number of unminuted meetings with David McCourt of Granahan McCourt the last remaining contractor in the tendering process.

The department was to have made a decision on whether or not to accept Granahan McCourt’s bid prior to Christmas, but it was shelved until the New Year.

“We want to make sure that the contractor can deliver,” Taoiseach Leo Varadkar said. “We’ll make a decision, I would anticipate, in the first two months of the new year as to whether we sign that broadband contract or not.”