From Grand Theft Auto V to Fortnite: our top 10 games of the last 20 years

Choosing the best games of the last two decades was no easy feat, but here they are 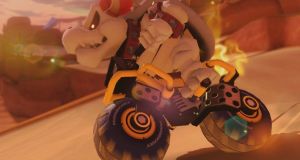 Mario Kart 8: you can’t have a games list without at least one Mario game on it and this one unites all types of gamers

What video games made a lasting impact on you? When you think of the hours spent in front of your games console or PC – and now mobile devices – in the past two decades, what games stand out?

Compiling a list of the top 10 games that made an impact since 2000 invites debate. There are plenty that didn’t make the list, for various reasons, but would have been worthy entries – Overwatch, Limbo, Florence, Dead Space, Assassin’s Creed 2, almost every Elder Scrolls title from III and onwards. We could have filled a list of 50 or more, but the brief was 10 games that made an impact over the last 20 years.

Some are there because they were the best of their time; others made the list because despite being of dubious artistic merit, they made a lasting impact on the games industry. What makes your list?

Grand Theft Auto IV had an impressively rendered New York as your playground, but Grand theft Auto V takes the action to the west coast. Everything looks better with a suntan, even a psychopath with anger issues. The protagonists are problematic, but this is GTA at its finest, with some beautifully detailed scenery and escalating mayhem.

As far as the story goes, Half-Life 2 treads familiar ground. An alien invasion has taken over Earth, and a small resistance movement is fighting back. As Gordon Freeman, you are leading the movement, futile though it may seem. Half-Life 2 combines first-person shooter and puzzles, with environments that at times took your breath away. The game deserves a mention though for having – in our opinion – the best weapon of all time: the gravity gun.

Build it, break it, then remake it; Minecraft appeals to the both the functional builders and the creative ones. The graphics are blocky and crude at times, but that hasn’t limited players’ creativity. There are some jaw-dropping Minecraft projects, such as the WesterosCraft recreation of the seven kingdoms of Game of Thrones, or the Minecraft take on Grand Theft Auto where Los Santos becomes MineSantos and some – not all – of the murkier elements of the game have been removed. There are servers dedicated to The Lord of the Rings, the Walking Dead and Harry Potter, each with their own twist. Manage your resources, fight off the creepers and explore worlds – there’s a lot to love about Notch’s creation.

Love it or loathe it – I fall into the latter category – Farmville has had a serious impact on the games industry, by turning millions of people into gamers without them even realising it. It tapped into the casual gaming trend and helped ease the way for the likes of Angry Birds and Candy Crush to sweep in and clean up. At its peak in early 2010, the game had 83.76 million monthly active users.

It didn’t require a massive investment of time, unless you really went down the rabbit hole, and it cost nothing to play, so the game appealed to a cohort that wouldn’t have traditionally considered themselves “gamers”.

On the downside, the game encouraged you to spend cash to advance further, was repetitive at best and pushed you into annoying all your friends into helping you. It was possibly responsible for the death of a few Facebook friendships in its time. But by 2011, its popularity was on the wane – thankfully – and these days all those annoying game invites will be from Candy Crush players instead.

Originally released in 2000, the Sims inspired in us a sense of community, control and the odd bout of megalomania and sadism. Who hasn’t set up the perfect family in a fabulous country home only to blow their lives apart by forcing one of the couple to start a thing with the neighbour?

Or how about making your Sim work out to increase their stats by putting them in the backyard pool for hours at a time, and maybe removing the steps so they eventually succumb to exhaustion? We loved the Sims, with their weird Simlish babble and complete inability to complete even the most basic self-care tasks without a gentle reminder.

If you need any reassurance about how much of an impact Fortnite has had on our culture, ask yourself when was the last time you copied a dance move from a video game. Before Fortnite, I mean. Now we all know what the floss is (and no, not the dental kind) and when the game shut down for a few days to prepare for its next chapter, it made news headlines everywhere. Not bad for a game that is basically a last man standing battle.

You can’t have a games list without at least one Mario game on it. Everyone’s favourite plumber has to feature, and what better way to dive into the list than with Mario Kart? Mario Kart 8 combines excellent courses and colourful characters with good old-fashioned party play. It is the one game that never fails to unite the age groups; younger players and hardened gamers alike can usually be persuaded to hop onto the track.

Complicated and dark, Dark Souls is often held up as the standard to beat. Death may just be the beginning, but if you don’t proceed with caution and learn from your mistakes, you’ll find yourself walking those steps over and over. Dying a million deaths may feel like an exaggeration, but Dark Souls is so challenging that it certainly feels that way.

World of Warcraft feels less like a game and more of a vocation. Putting the “massive” into massively multiplayer role-playing game (MMRPGs), WoW was originally released in 2004, a follow-up to Warcraft III. It reached 100 million player accounts in 2014, generating a dedicated fanbase that aside from building their skills and taking on quests have also formed close relationships, with weddings hosted in WoW alongside a funeral here and there.

Since its initial release there has been a number of different add-ons and updates, but the appealing thing about WoW is that as MMRPGs go, it’s an easy one to get into. You can jump in to solving quests, find a team that fits your style, or just hang around and do some exploring. Something for everyone.

Legend of Zelda: Breath of the Wild

If you are of a curious nature, Legend of Zelda: Breath of the Wild is worth checking out. While there are plenty of great Zelda titles, this one really stands out by throwing away much of what you knew before. In fact, it wipes the slate clean. When Link awakens after a fairly lengthy nap, it is to a world of which he has no memory. To regain those memories, he must explore – and so begins your adventure. There are nudges along the way to keep you moving forward, but this is an open world that is ripe for exploration.