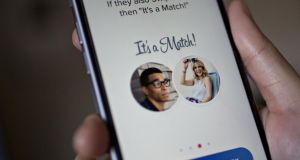 How did you meet your partner? For a growing number of people, the answer will be “online”, through one of the many dating apps that have sprung up in the past decade.

It’s not that long ago that the idea of admitting to your friends and family that you had been online dating was slightly unusual. But 2015 brought Tinder and that, as they say, was that.

Obviously, Tinder wasn’t the first dating website out there. Match. com, POF (formerly Plenty of Fish) and OkCupid have all been around since the early 2000s. But it certainly made it more recognisable to people.

And who could forget Ashley Madison, the website set up for people who were looking for extramarital relationships with the charming slogan “Life is short. Have an affair”? The Canadian site shot to fame after a major data breach in 2015, when hackers stole its customer data and threatened to reveal names, email addresses and sexual fantasies if the site and another, EstablishedMen.com, were not shut down. That was an awkward conversation over the breakfast table for some people.

But what are the options now?

You might have seen stickers on street cabinets around Dublin bearing the name Bumble. It’s part of the dating app’s attempt to create a bit of buzz around the site, with its ambassadors – the Hive – carrying out tasks that will help get the site noticed.

When Whitney Wolfe Herd set up Bumble in 2014, it was designed to put women in the driving seat. Women initiate contact in heterosexual matches; same-sex matches can be initiated by either person.

The app has branched out, and Bumble has three different services wrapped into one app: dating, friendship and business networking. The important thing? You can disable the dating part if you no longer need it but fancy keeping the Bumble Bizz and BFF profiles open. More importantly, it will tell you exactly when the dating profile was disabled, keeping you out of relationship trouble.

For those seeking romantic connections, Bumble has a few rules to keep their members safe. First, you need a profile photograph with every account, and it has to be verified by the company’s technology and team as a real person. No photo, no account.

Second, any abuse, weirdness or obvious dishonesty (like claiming you are someone you’re not, or failing to disclose that you’re married, for example) could land you in trouble with the site. In some cases, you’ll be banned from using Bumble, and they are fairly quick to react to reports.

Bumble’s team also wanted to tackle some of the worst things about online dating for users. Ghosting is something that – online dating or not – everyone is familiar with. Bumble’s attempt to deal with that particular phenomenon is to set a time limit on messages. You have 24 hours to reply to a message or else it drops out of your inbox. On one hand it focuses the mind; if you aren’t interested, the message isn’t sitting there, waiting for you to respond, and if you are waiting for a reply, once the 24 hours has passed it’s no longer grabbing your attention. On the other hand, it can be quite limiting, with conversations disappearing from your inbox before you get a chance to respond.

Cost: free for the basic membership, but a subscription will get you access to certain features. Bumble Boost, for example, will extend your matches beyond 24 hours, let you reconnect with expired matches, or seeing which users have already swiped right on you. Bumble Coins can be used to get your profile extra attention, or make a better impression with your swipes.

The app that made “swipe right” a part of popular culture, Tinder is responsible for everything from friendship and hook-ups to relationships and new Irish ventures. Irish networking app GirlCrew started as a Tinder post when co-founder Elva Carri was looking for people to join her for a night out.

Founded in 2015, Tinder claims to be a cultural movement. You can match with people, chat through the app and progress to dating. It is location-based, so if you move city even temporarily you can pick up matches in the local area.

There is certainly something to the claim that it is a cultural movement, Not only has it made “swipe right” and “swipe left” phrases we all understand, but it also inspired its own musical, which has just finished a run in Dublin’s Olympia.

It’s not all good though. The ratio of swipes to the number of matches is lower than you’d think, plus the number of matches that lead to actual conversations and dates is even lower. That’s because Tinder taps into two things: your ego, when yo get a match, and the paradox of choice. Too much choice – or the illusion of too much choice at the very least – can lead to users being unable to make a choice for themselves.

Cost: The basic Tinder app is free, but if you pay for the Tinder Gold subscription you get extras such as the ability to see if someone has liked you before you swipe right on them. You’ll need Tinder Plus at the very least to change your location as you travel around the world, and you can also undo an accidental swipe.

Hinge has a strange premise for an app: it wants to be deleted. The reasoning is that if you are deleting Hinge, you’ve found your match and the app has done its job.

Hinge was set up by Justin McLeod in 2012, but as of 2019 it’s own by Match Group. If that sounds familiar, it’s because it’s the same group that owns Match.com, POF, OkCupid and Tinder. That’s a lot of dating apps owned by the same company.

There is no swiping; Hinge prides itself on being less “superficial” than Tinder, so swiping is out and “liking” is in. You have to fill out your profile before you can start liking potential matches, so there’s an incentive for you to give out a bit more information.

You can upload lots of photos too, so you aren’t dependent on a single photo to show your best side. Likewise, it reduces the likelihood (although not eliminating it) of fake profiles. It’s a bit more effort to hunt down five or six photographs of the same person.

It also tries to make better matches for you by learning your personality and setting unique questions so you have a better idea of your potential match’s personality.

Ghosting, again, is an issue so Hinge tries to cut down on it by prompting users when it’s their turn to respond.

Cost: It’s free to sign up but to set some advanced preferences, you’ll need to pay up for the preferred membership

With all the dating apps out there, it was inevitable that some enterprising entrepreneur would create an Irish version. That’s where Teeze comes in, established by software developer and former telecoms consultant Noel McKeown at the end of 2016.

It’s unique selling proposition is targeting the low conversion rate between online matches and face-to-face meetings. McKeown has described app-based dating as an “egocentric, superficial and low-action landscape”. The sticking point? Date proposals, with fear of rejection likely responsible for the lack of action. Getting over that obstacle was McKeown’s goal, so Teeze makes it easier to set up dates by offering suggestions for your next interactions, from simple flirting to a date venue or a sport suggestion. It uses Google Maps to pinpoint potential venues in your area and suggest them. Basically, it takes care of all the heavy lifting for you.

Cost: Teeze is free. For now at least.

In the online dating world, few websites have reached the heights that Match.com has. The dating group owns most of the main dating sites, adding Tinder to the list this year.

Match.com has history in the dating market. It has a good pool of members all over the world, although it doesn’t say how many are active on the site.

There’s an online dating coach – if you need advice – and a Zen mode that means you’ll only be contacted by profiles that match your criteria. There is also a specific over-50s setting so you will cut out much of the irrelevant traffic on the site.

Cost: Like most other dating apps, Match.com is free to set up a profile and perform a limited number of tasks. Subscribers can see who visited their profile, and you can pay for a day or a month and get the chance to browse people’s profiles incognito.

Formerly known as Plenty of Fish, this Match Group-owned app is popular in Ireland and the UK. Established in 2003, it claims responsibility for the birth of more than a million babies.

Among the features on the site are a restriction on contacting people with more than a 14-year age gap, and a new concentration on “meaningful relationships” instead of casual encounters. It matches people based on a chemistry predictor, based on some criteria in your profile.

To keep its members safe, it will block messages sent by male members if they contain certain words – but the sender will never know as the message will still show as sent.

The most recent figures – 2015 – show 100 million users on the site, but again, there is no indication how many of these are still active.

Cost: free to use, with some premium features such as an increased number of images uploaded to your profile, and the ability to see if your message has been read or deleted.

Internet dating isn’t just for the relatively young. Lumen is aimed specifically at the over-50s market, unlike other apps that have added it on as an extra. But it knows it isn’t doing anything ground-breaking, because there are dating sites aimed at the more mature market. The issue, as far as Lumen is concerned, is that these sites are dull and boring. And just because you are over 50, it doesn’t mean you should be consigned to dull dating. Neither should you be forced into the generic dating apps.

So Lumen was born. Photos are verified, each profile needs a bio and at least three photos, and it is strictly for people over 50.

The free subscription lets you start six new conversations a day – that number doesn’t include ongoing conversations or replying to messages you have received. If you want more than that, you’ll need to pay, which will double your conversations limit. The reason for the restriction is to concentrate on quality over quantity, eliminating the temptation to play the numbers game.

Cost: the free subscription lets you start six new conversations a day – that number doesn’t include ongoing conversations or replying to messages you have received. If you want more than that, you’ll need to pay, which will double your conversations limit. You can also extend conversations by 72 hours if you feel your connection needs more than the standard seven days to respond.