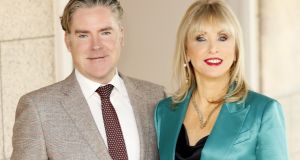 Voxpro founders Dan and Linda Kiely: firm started with six people in 1995. Its workforce has grown to more than 6,000. Photograph: Kieran Harnett

Telus International has acquired the remaining interest in fast-growing Cork-based business process outsourcing company Voxpro that it did not already own.

Employees of the company were informed of the news on Monday.

The Canadian call centre giant acquired a 55 per cent stake in Voxpro in August 2016 for $58 million (€52.4 million) with an option to acquire the rest of the company in a deal valued at up to $150 million.

The company, founded by Dan and Linda Kiely, started with six people working above a pub on Marlboro Street in Cork city in 1995. Since the initial deal with Telus, Voxpro has seen its workforce grow from 2,700 employees to more than 6,000.

Mr Kiely, who stayed on as chief executive of Voxpro following the earlier deal with Telus, is stepping down from this role, but will retain a global strategic advisory position with the Canadian group focused on ongoing partner growth across Europe and North America.

“These are really exciting times for Voxpro and Telus International as we continue to grow and transform our operations globally. This is very much a natural progression of our integration into the Telus International family and both Linda and I feel that this is the right time to move on to the next phase in our collective evolution,” Mr Kiely said.

“We have loved every minute of watching our business grow and we cannot express our appreciation enough to everyone at Voxpro for all of their hard work and efforts over the years,” he added.

The last publicly available accounts for Voxpro show it recorded a €2.5 million pretax loss for the 12 months ending December 2017, as it invested heavily in the business. Revenues jumped 50 per cent to €91.1 million.

Mr Kiely earlier this year said Voxpro was considering tapping public markets in an initial public offering in the “not too-distant future”.

It is not known if a market listing forms part of Telus’s plans for the company.