Five things to watch out for in Apple’s earnings

Tech giant is expected to report revenues up almost 5% to $88.1bn, just shy of its record 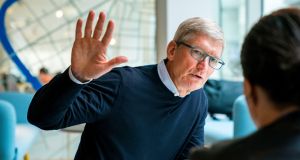 Apple shares have soared almost a third since the iPhone maker’s last earnings, sending the company’s valuation to a record $1.4 trillion for a US company.

The rally leaves expectations high for the company’s first-quarter results on Tuesday, with analysts projecting that slightly lower sales for the iPhone, iPad, Mac and MacBook will be offset by faster growth in services and wearables.

The holiday period is Apple’s most important quarter by far. Apple is expected to report revenues up almost 5 per cent to $88.1 billion, just shy of its record high two years ago. Meanwhile, profits are forecast to edge up to $20.1 billion, according to an analyst poll compiled by Visible Alpha.

Several analysts have already lifted their 12-month price targets, with some issuing bullish predictions for the coming year when Apple is set to release its first 5G-enabled iPhone.

Wedbush, for instance, raised its price target this month to $400, implying a valuation of $1.75 trillion.

“We believe by the end of 2021 Apple has potential to be the first $2 trillion valuation given the 5G tailwinds and services momentum potential over the coming years,” said analyst Dan Ives.

With such enthusiasm adding pressure to Apple, here are five things to watch for in Tuesday’s report.

Before the iPhone 11 was released in September, investors feared that sales would suffer as consumers held out for a 5G-enabled model in late 2020. Indicators now suggest the flagship phone, with its faster processor and triple-camera, has done remarkably well – thanks in part to a cheaper, $699 starting price.

“The iPhone 11 launch helped turn the tide for Apple,” said Vincent Thielke at Canalys. “They lowered the price, and having more affordable iPhones was a nice surprise.”

Apple is expected to earn $51 billion in iPhone revenue last quarter, just below last year and accounting for 58 per cent of the total.

Apple’s dominance in “wearables”, led by AirPods and the Apple Watch, is predicted to have been sustained during the holiday season. The division is expected to have chalked up $10.2 billion in revenue, 40 per cent higher from a year ago.

“No other product category would come close to matching that kind of revenue growth,” said Neil Cybart, an Apple watcher at Above Avalon.

However, one risk is that the noise-reduction AirPods Pro, launched in late October, experienced supply problems that may have dented the division’s performance last quarter. But a combination of a new Series 5 Watch, coupled with a $199 Series 3 Watch, is expected to help the numbers.

The idea that Apple is turning into a services company can appear mere hype given the group’s continued reliance on the iPhone. But by generating revenue from more than 450 million consumers buying streaming content, news and warranties – or any range of things on the App Store – services has become its second-biggest division.

Last year Apple earned $46 billion from this high-margin unit, accounting for 18 per cent of sales. In the first quarter it is expected to have generated $13.1 billion in revenue, up 21 per cent from a year ago.

One question mark is how Apple TV+ is faring, given the success of Disney+ and increasingly competitive – and costly – “streaming wars”. Apple has yet to release numbers on how many people have signed up – let alone those paying, given its free 12-month trials to anyone who buys new hardware. Investors have also been given little information on its Arcade gaming service or the Apple credit card.

The bullish sentiment towards Apple marks a stunning reversal from 12 months ago, when the iPhone maker was forced to cut its profit target and warn of weakness in China.

The anxiety over the Chinese market proved prescient – annual revenue from greater China, which includes Taiwan and Hong Kong, fell to $44 billion in the year to September from $52 billion in 2018 – but Apple has navigated through trade tensions remarkably well. In the first quarter, analysts expect Apple to have made $14.7 billion of sales in greater China, up 11 per cent from a year ago.

Tom Forte, an analyst at DA Davidson, credits “the diplomatic skill” of chief executive Tim Cook in being able to work with both China and the US. “Apple is in a class of one,” he said. “It’s the only company that can lobby both the US government and the Chinese government. It’s almost too big to fail for both countries.”

If there is a risk, it is that Apple faces ever-growing competition from local rivals in China, and with much of its film, gaming and news services blocked there, it is less easy to mitigate a slowdown in hardware with other offerings.

As the iPhone remains Apple’s dominant revenue driver, investors will be eager for any indications on how 5G could add momentum to earnings later this year and propel the stock higher.

If iPhone sales prove as steady in the holiday quarter as analysts expect, it would suggest that Apple is not too late to the 5G market even though Android-based rivals such as Samsung and OnePlus are already selling them in the US.

Mark Bachman, an analyst tracking 5G adoption at M Science, said that only 2 per cent of current US sales are for 5G phones, whereas Apple looks primed to enter this market late in the year when more infrastructure is ready and adoption ramps up to 20 per cent of the market.

“They are behind in a market that is very nascent,” he added. “We haven’t seen the full force of the adoption cycle ... Apple will instead [release a 5G phone] just as the market hits its stride.” – Copyright The Financial Times Limited 2020

1 Life as a Facebook moderator: ‘People are awful. This is what my job has taught me’
2 How well paid do you think you are? Here’s how to work it out
3 Ombudsman upholds 8 tracker complaints against banks
4 Irish in-flight entertainment firm blames coronavirus for closure
5 Ibec warns that Government may have underestimated corporation tax loss
Real news has value SUBSCRIBE