Net Results: Tech giant is major employer but it has benefitted plenty from 40 years in Ireland 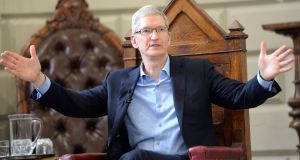 On the stage of international commerce, one of the strangest moves yet made by Ireland – a one-time business bit player that has over time stepped up into a surprising number of significant roles – is the decision by IDA Ireland to grant Apple chief executive Tim Cook an award next week, to be presented by the Taoiseach, solely for fronting a company that has been here for 40 years.

Explaining the decision to offer Cook such laurels, IDA chief executive Martin Shanahan, said in a statement: “We should never take foreign direct investment for granted.”

Well, quite. We shouldn’t, and for at least three decades now, I don’t recall anyone ever accusing Ireland of being anything other than adept – even exemplary – in making sure FDI was a top national priority. The lengthy roster of multinationals based in the State testifies to Ireland’s notable failure to neglect FDI at any stage or to take it for granted.

Who among us does not wish that the Government had not shown its appreciation quite so vehemently as to refuse even a smidgen of Apple’s €13 billion in back taxes?

FDI is Ireland’s superpower, channelled by the IDA, which has wielded it extraordinarily well. The IDA’s continued success since the 1980s in attracting a stellar roster of global companies to such a tiny country is the envy of other governments.

FDI is also one of the key reasons government ministers go forth to proselytise on St Patrick’s Day, often accompanied by regional IDA officials, preaching Ireland’s gospel of low taxes, a well-educated workforce, and the willingness to stuff yet another company or major expansion plan into Dublin’s straining infrastructure.

Where San Francisco has already gone in altered cityscapes, spiking rents and expanding commuter woes, Dublin surely can follow, all in the holy name of FDI.

The problem with Shanahan’s comment is that Ireland has demonstrated its enthusiasm on this point to a fault. And with this very company, Apple.

Who among us does not wish that the Government had not shown its appreciation quite so vehemently as to refuse even a smidgen of Apple’s €13 billion in back taxes that the EU decided were owed in Ireland due to a overly-generous allocation of State supports?

Instead, even as we were reeling from bailing out the banks, a decision that imposed a financial burden on taxpayers that will continue until our children’s children’s children are buying their first iSomethings, that tidy windfall was sequestered off to what is apparently the world’s largest-ever escrow account. There it rests, awaiting the outcome of Ireland’s appeal against being forced to take money the State badly needs, but does not want.

Then there was that awkward planning permission contretemps over the proposed €850 million Apple data centre in Athenry that never happened. As the leisurely planning appeals process wound its way, Cook grew tired of waiting and gave the centre to the Danes instead.

In the not-so-distant wake of these two events, and given regulatory concern in Apple at home (three privacy investigations, as of last July) and in the EU (on anti-trust grounds), handing out what looks to the world like a Very Random Award risks coming across as anxious government kowtowing. Especially in the absence of such an event being a regular formality of such note as to feature the Taoiseach of the day as the award-giver.

Sure enough, business news agency Bloomberg headlined its piece on the award, “Apple’s Cook Set For Irish Award After Years Of Tax Disputes.”

Yes, Apple has been a good employer here, and now has one of the largest workforces in Ireland. Apple also was here before many of the internet-era come-latelys but then, so were others who have endured and expanded, including IBM, Intel, and Microsoft.

Still, as thankful as the State should be (and is) for FDI companies that employ huge workforces and pay (some) taxes, too, it really is not seemly to single out individual businesses for special awards just for being here. Especially when Apple clearly prospered greatly by being in Ireland over those 40 years, even setting aside the EU-disputed sums.

And so do many other companies now, under beneficial arrangements that are shielded from the public as such deals remain highly secretive, mostly invulnerable to Freedom of Information requests – hence, it took an EU investigation to expose the details of Apple’s arrangements. The companies that have stuck around have all done well from being here. Otherwise they’d leave, with several options of even-lower tax jurisdictions open to them and inducements offered by other governments.

It is perfectly acceptable for officialdom here to say thanks, but public awards are inappropriate and damage rather than enhance Ireland’s business profile internationally – much like having government departments challenging national regulators. Maybe officials might host a private dinner, or give a special mention in a speech at the annual American Chamber of Commerce Ireland Thanksgiving luncheon.

But a formal thank you award given just for sticking around? Take some advice from Apple: “Think different.”