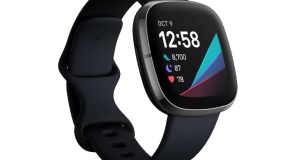 Fitbit is taking on rivals Apple, Samsung and Garmin with a new activity tracker that will measure stress levels, use advanced heart rate tracking technology and monitor skin temperature.

The Fitbit Sense includes the world’s first electrodermal activity (EDA) sensor on a smartwatch to help manage stress. The sensor detects small electrical changes in the sweat level of the skin that can help users understand their body’s reaction to stress and how best to manage it. The information is then transferred to an app, where Fitbit’s new stress management score calculates how the wearer’s body is responding to stress based on heart rate, sleep, and activity level data.

“Our mission to make everyone in the world healthier has never been more important than it is today. Covid-19 has shown us all how critical it is to take care of both our physical and mental health and well-being,” said James Park, cofounder and chief executive of Fitbit. “Our new products and services are our most innovative yet, coupling our most advanced sensor technology and algorithms to unlock more information about our bodies and our health so you can be in control. We are breaking new ground with our wearables, helping you better understand and manage your stress and heart health, and pulling your key health metrics together in a simple and digestible way to track things like skin temperature, heart rate variability and SpO2 [blood oxygen saturation levels] so you can see how it’s all connected.”

Smart watches have been building in new features such as ECG functions to widen their appeal to users who want to keep a closer eye on their health.

The health tracking company also debuted an updated version of its Versa smartwatch, with new fitness and voice control features, and built in GPS to track runs, and widened the appeal of its Inspire activity tracker with the addition of active zone minutes and improved battery life.

Fitbit will also allow users with compatible smart watches to see more information about their blood oxygen levels in the app, a metric that has become increasingly of interest amid the current pandemic.

“Wearables may be able to play an important role in the early detection of infectious diseases by acting as an early warning system for our bodies, which is critical to slowing the spread of Covid-19 and to better understanding disease progression,” said Eric Friedman, cofounder and chief technology officer of Fitbit. “Over 100,000 Fitbit users joined the study so far, and we’ve found that our algorithm can detect nearly 50 per cent of Covid-19 cases a day before the onset of symptoms with 70 per cent specificity. This research shows great promise to help us understand and detect Covid-19, but can also serve as a model for detecting other diseases and health conditions in the future.”

The company’s subscription service, Fitbit Premium, includes a new health metrics dashboard that tracks key metrics and trends to see how they affect overall well-being, while the free app includes a mindfulness section to allow users to focus on mental well-being.

The company is in the process of being taken over by Google but regulators have yet to fully approve the deal. Consumer groups in the US and in Europe have come out against the deal.

Google has already pledged not to use the health data gathered from Fitbit’s tens of millions of users to enhance its ability to target advertising. But EU officials have sought further concessions, including guarantees that all of Fitbit’s data would be open to third parties on equal terms, and a promise that Google would not use the data to improve its search engine business.

In July, it emerged the deal would be delayed further, with the EU deciding to open a longer antitrust investigation. The company is also facing opposition from Australian regulators, who have raised concerns about the deal, and in the US, authorities have said it risks entrenching Google’s power online.