Samsung Note 20 Ultra: All the phone you need in one nice package

Tech Tools: Eye-popping display, great camera and plenty of power – this Note’s for you 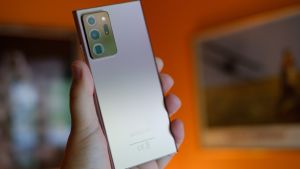 Samsung Galaxy Note 20 Ultra: Pricey, but one of the best Android handsets around – for now. Photograph: iStock

There are some things that are relatively predictable in the tech world. One of them is that there is always a new iPhone in the autumn; and before that, there will always be a Note. Even in a pandemic, it seems that Samsung is determined to stick to that tradition.

The Note 20 Ultra is exactly what we’ve come to expect from Samsung: large, eye-popping display, great camera, the hidden stylus, and plenty of power to call on when you need it. It is all the phone you need, even if it doesn’t come with the smallest of price tags.

Samsung always does well with its phone displays. The Note 20 Ultra is no exception. The 6.9-inch Amoled display is crisp and has exceptional colour. Capable of wide quad HD resolution, the default setting is for full HD+, with the option of 60Hz or 120Hz for smoother scrolling. But you have to choose between WQHD or the 120Hz rate; both can’t work together. The 120Hz rate will also have an impact on your battery life, so it’s worth considering if you need it – or indeed the WQHD resolution at all.

On the inside, the phone comes with 256GB of storage space, and 12GB of RAM. For reference, that is more than the laptop that I’m currently writing this on, which has 8GB RAM. The Ultra also has an octa-core chip inside that runs everything smoothly and without stutters.

It’s all encased in a very nice package. Samsung has ditched the high-gloss back for something a little more matt. That means no fingerprints, or at least fewer of them, although it’s not any easier to keep hold of.

The one thing is the camera. That camera bump on the back is prominent. Very prominent. If you wanted something with sleeker lines, the Note 20 Ultra may not be the phone for you in that respect. But before you discount it out of hand for its aesthetic choices, bear in mind that you will notice the bump a lot less when you put a case on it. And, let’s be honest about it, most people will, because at the price it costs, you don’t want anything damaging it. I haven’t had a phone without a heavy duty case on it for about five years now and, as phones get more and more expensive, I don’t see that choice changing.

It is a shame to cover up the rest of the phone, though, as – camera bump aside – it really is a nice phone. The review unit we got was “Mystic Bronze” (or just bronze to the rest of us) and it’s an eye-catching handset.

But looks aren’t everything and, thankfully, Samsung delivers on the substance too. The camera is fantastic, with Samsung’s ultra-zoom capabilities, a 10-megapixel front-facing camera and a triple camera set-up on the back that comprises 108-megapixel, 12-megapixel and 12-megapixel. Optical zoom-wise, you get 5x magnification, which will get you reasonably close to your subject without loss of quality.

The space zoom on the Ultra gives you 50x magnification, but it is worth bearing in mind that this is digital zoom, so it won’t be as high quality when you push the camera to its full zoom potential. The 100x zoom that was included with the Galaxy S20 Ultra isn’t missed here, though, as the 50x produces more usable images.

The other thing to bear in mind is that, like the Samsung Galaxy 20 Ultra, that level of zoom will require more than a steady hand if you want to avoid the shake; it will need a tripod to get a shot that won’t feature a considerable amount of shake. It performed much better at lower zoom levels, such as 20x.

On the video front, the Note 20 Ultra has the ability to shoot in 8K, with the handset offering you more than enough screen and power to edit the footage afterwards.

However, there is still a bit of obvious processing on the photos, even when they are taken without the zoom capabilities. The textures are smoothed a little too much to look natural.

The Note is expected to be more of a workhorse, though, and Samsung has built in some technology to ease that particular path. The S Pen gets more air gestures this time, and there is also more integration with Microsoft’s software. Samsung’s Dex allows you to connect to a display wirelessly, giving you a PC-style experience, while still letting you use your phone. Your phone can also double up as a trackpad.

The good
The display is one of the best things about the Note 20 Ultra. It’s crisp, it’s clear, and with the 120hz mode enabled, everything is just that little bit smoother. Ditto with the camera, and you don’t lose anything for ditching the 100x zoom, especially with the inclusion of laser autofocus. The shots at 50x are usable, if not always perfect.

The expansion of the S Pen’s gestures is always welcome, even if you’re likely to stick to the same ones you have come to trust over the years.

The not-so-good
The camera may have some improvements thanks to the laser autofocus, but your images sometimes get that over-processed look.

The rest
The Note 20 Ultra is 5G compatible, so when your network finally offers it in your area, you will be able to take advantage of the upgrade.

The verdict
Pricey, but the Note 20 Ultra is one of the best Android handsets around – for now.