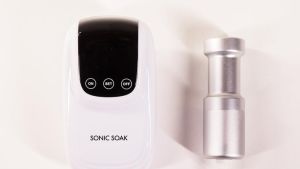 The Sonic Soak works through a process called cavitation, creating bubbles that remove dirt and other detritus from your items.

I’m a glutton for punishment. That’s the only sensible conclusion I can come to after trying yet another ultrasonic cleaner. They seem like such a great idea: stick this thing in some water with whatever it is that you want to clean, and it will vibrate all the dirt off it. If you are environmentally conscious, it means you can cut down on detergent and water use, skipping over the fact that it’s another electronic device that has to be manufactured and powered somehow. Minimal effort, maximum results.

But as past reviews have shown, things don’t always live up to their promises. At least, they hadn’t for me, specifically when I backed Dolfi on a crowdfunding website. The Sonic Soak was intended as a replacement for the Dolfi, which didn’t seem to do a whole lot on any item I tested it with. But after it arrived, I tested it to make sure it was working properly, and then shoved it into its bag and into a box under the sink, where it remained for quite a while before being dragged out again.

The Sonic Soak promises a lot of the same things: convenient and easy cleaning, saving you time and water. Does it deliver? In a way. But whether it is more convenient than regular washing is something that could be debated.

The device itself is a small cylinder – the transducer – connected to the power supply, which has a small display that counts down the time remaining on your washing programme, along with the buttons to set the programme.

So what is the Sonic Soak best used for? According to the company that makes it, the device can be used to clean almost anything – clothes, jewellery, fruit and veg, pots and pans – anything that needs to be cleaned. It works through a process called cavitation, creating bubbles that then remove the dirt and other detritus from your items. Most things will only require a container of clean water; some may need extra help with added cleaners or stain removers. And heavier items, such as jeans, or large numbers of items aren’t really suitable.

Given my past failures with ultrasonic cleaners though, would the Sonic Soak do what it claimed? Or is this destined to return to the box and never be seen again?

To set it up, you put your item needing to be cleaned in a container, put the sonic soak transducer in the water directly above it, and then plug the device in. You can set your wash timer and then walk away and leave it to do its thing.

The Sonic Soak is quiet, so you aren’t even aware that it is working away unless you really pay attention. It certainly seemed as if it was doing what it should. It passed the aluminium test – where you fold some aluminium foil under the transducer, turn it on and see if it shakes some holes in the foil. If it does, the power level is fine and the device is working as it should.

When it came to laundry, the Sonic Soak seemed to do better when used for longer periods of time. The mid-range settings – six minutes – didn’t do a whole lot to shift some of the stains from my clothing, but giving it a second shot got things a little cleaner.

No heavy items rules out a lot of things though, so in terms of a travel laundry, its scope is limited. I certainly won’t be dumping the washing machine in favour of washing items a few at a time with the Sonic Soak. But in an emergency, it may well do the job.

As a fruit and veg cleaner, it seemed like overkill when you can just give the items a rinse under the tap. According to the company though, there is lots of hidden dirt and contaminants we can’t see – pesticides and so on – but there is no way for the average user to prove the Sonic Soak is removing all this.

Will I keep using the Sonic Soak? Not as a regular cleaner. For fruits and veg, it was just too much hassle; for some clothes I had better results handwashing the items at the sink. But it could certainly be an emergency cleaner for occasional use.

It seems to work, just not in the way that I would have hoped. It depends on the kind of dirt you are trying to remove; heavier stains didn’t really come out but lighter ones were removed from cloth. It also made cleaning some heavily soiled cookware a little easier.

You can only use it for a small number of items, and it won’t work for everything. You may still need to use detergent for some stains, and the plug requirement makes it a little less portable than you’d like. I’m still a little nervous about immersing something with a plug in water.

The device claims to eliminate 99.9 per cent of bacteria too, although we didn’t have a lab on hand to test that particular claim.

While the Sonic Soak did better than the Dolfi, I’m still not convinced the cleaner is any more effective or eco-friendly than swishing your items around in some water. I’d happily be proved wrong though.

1 Should I switch bank now with Ulster Bank at risk of closing?
2 Air travel never going ‘back to way it was’
3 Will brother’s widow get half of our parents’ estate when they die?
4 Household wealth jumps by 74% since last recession – report
5 ‘Tax war’ will hit Ireland if digital tax talks fail, OECD says
Real news has value SUBSCRIBE