Fitbit sprints into the lead in the wearable tech race 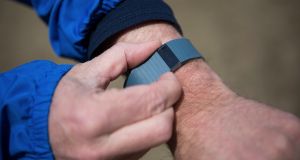 According to recent figures from research firm IDC, Fitbit had 23 per cent market share in the wearable technology space in the third quarter.

The fast-growing health tech firm, which opened its European headquarters in Ireland in August with plans to boost headcount to at least 50 people by the end of 2017, recorded a $3.4 million profit at Fitbit International Limited last year. This compares to a $7,734 profit for the six months to the end of December 2014.

After provision for taxation, the profit for full-year 2015 totalled €2.9 million.

The company’s principal activity is “engaging in the sale of connected health and fitness devices with software and services”.

Fitbit was set up by James Park and Eric Friedman in 2007. The US-based firm has since grown its fitness and sleep tracking devices to a global brand, with more than 50 million devices shipped globally.

Fitbit says it has room for up to 100 staff at its Baggot Street office.

The company, which snapped up assets from rival Pebble last month, continues to lead the wearable technology space, which grew 3.1 per cent overall in the third quarter with 23 million shipments globally.

According to recent figures from research firm IDC, Fitbit had 23 per cent market share in the third quarter, with total device shipment volumes rising from 4.7 million to 5.3 million.

The group’s parent warned in November, however, that revenues for the holiday period were likely to be impacted by soft demand and production issues related to its new Flex 2 wristband.

Fitbit forecast revenue of $725 million to $750 million for the October-December quarter. This was well below analysts’ average estimate of $985.1 million.

Shares in the company plummeted by more than 30 per cent in extended trading following publication of the forecast.