Marissa Mayer to resign from Yahoo’s board of directors 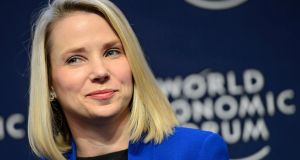 Marissa Mayer is among six directors who plan to leave Yahoo board. Photograph: EPA

Yahoo has revealed its plans if the sale of its main internet properties to Verizon Communications goes ahead, with chief executive Marissa Mayer to step down and leave the board of the investment company that will remain.

Ms Mayer is among six directors planning to leave the board of Altaba, which will be a shareholder in Alibaba Group Holding and Yahoo Japan.

The plans were outlined in a regulatory filing on Monday.

The directors that will remain with Altaba after the closing of the Verizon sale are Tor Braham, Eric Brandt, Catherine Friedman, Thomas McInerney and Jeffrey Smith.

Yahoo agreed to sell its web properties to Verizon in a deal valued at about $4.8 billion, though questions have come up after Yahoo revealed two separate hacks of user data. Verizon is currently looking at its options, with renegotiating the sales price or cancelling the sale among them.

It was the second disclosure of a major data breach since Verizon agreed to buy Yahoo. In September, the tech company revealed that more than 500 million users’ data had been hacked in a separate, state-sponsored attack in 2014.

Yahoo’s investigation into the second hack still has weeks to go, according to Marni Walden, an executive vice president at Verizon.

Yahoo still provides Verizon the scale needed to build its media and advertising business, Ms Walden said. But she cautioned that the company needs to take a damage assessment before making a final decision. “We have to be responsible to the business and to everyone that invests in Verizon,” she said.