McDonagh’s Digisoft back in growth after strategic review 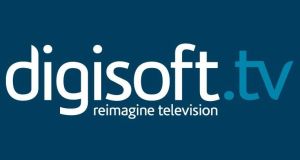 Digisoft, a video software company backed by serial tech investor and Riverdeep founder Pat McDonagh, says it is growing sales at about 40 per cent annually after shifting its strategy following a strategic review.

The company has recently diversified into providing to its clients so-called “experience management” software, which its chief executive, Fearghal Kelly, said can be used in the development of apps for telcos.

Digisoft has been profitable for the last 12 months, he said, and requires no further funding from Mr McDonagh or State agency Enterprise Ireland, which has invested more than €350,000 in Digisoft.

Mr McDonagh, who has a 44 per cent stake, has backed Digisoft heavily in recent years. Accounts for 2014 that were filed in recent weeks show shareholders had pumped more than €12 million into the company to cover its operating costs over the previous four years.

The accounts show Digisoft had accrued losses of more than €25 million, and owed about €18.3 million in loan notes and for the redemption of preference shares. It had an outstanding overdraft of €4.8 million, guaranteed by Mr McDonagh and John Allen, the Cork-based company’s founder, who retains a stake of more than 40 per cent.

In the published accounts, the directors attributed the heavy losses to product development.

He predicted sales would top €3.5 million-€4 million this year. It employs about 35 staff at its Cork base.

The company’s clients include Vodafone and also South African telco, Discover Digital, for which it provided software for a Netflix-like service in its home market.

1 Air travel never going ‘back to way it was’
2 Should I switch bank now with Ulster Bank at risk of closing?
3 Will brother’s widow get half of our parents’ estate when they die?
4 ‘Tax war’ will hit Ireland if digital tax talks fail, OECD says
5 Pallet manufacturer looks to imports as timber crisis takes root
Real news has value SUBSCRIBE