Checking the health of the fitness-tracking wearables market

The appetite for smartwatches seems to be waning, but the products keep on coming 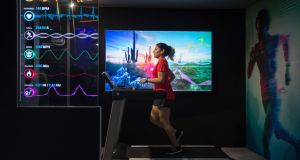 An athlete demonstrates the New Balance RunIQ fitness tracker watch at an exhibit of wearables by Intel during the 2017 Consumer Electronic Show in Las Vegas. Photograph: David McNew/AFP/Getty

Are wearables set to die out, dealt the death blow by falling consumer interest as the novelty of counting every step you take wears off? Are you still using that wearable tech gadget you got for Christmas? How avidly are you following the information on the apps?

Commentators speculate on the health of the wearables market on a regular basis, but as some of the high-profile players in the sector fall on their swords, it seems like a pertinent discussion for 2017.

Admittedly it’s not new. “Why wearables are a fad that will die out” screams one headline from 2014. “Are wearables dead?” asks another, more recent piece that laments a fall in consumer interest. Other articles note that even the Apple Watch – once considered the rising tide that would lift all smartwatch ships – has yet to confirm sales figures for its device, despite being on the second generation on the Watch.

And yet, the figures keep climbing and the products keep coming. Smaller, smarter trackers that now switch between activity and sleep monitoring with no intervention from the wearer. Trackers for sleep, water consumption, a monitor to keep track of oral health, even a smart hairbrush are all a reality in today’s connected world.

It’s reasonable to ask how many of these will still be around in a year or two, and how many will be discarded as novelty items that were fun for a while but more trouble than they were worth. The problem with many wearables, it seems, is habit, especially when it comes to devices that need to be charged on a regular basis. According to some figures, about a third of fitness band users will discard the devices after a few months, even more after six months.

It hasn’t halted the march, however. Fitbit, the current leader in the fitness tracker market, unveiled its new range of wearable bands last year, following up the Charge and Flex with the Charge 2 and Flex 2.

Samsung, meanwhile, has launched the Gear Fit 2 and its S3 smartwatch in an attempt to lure consumers to its platform. And Garmin, which has a grip on the running watch market with its Forerunner series, has not only gone for fitness trackers with the Vivofit band, but also tried to tap into the junior market with a tracker aimed at children.

Despite the pessimism from some sectors, the number of companies in the wearable tech sector exhibiting at CES 2017 rose. That doesn’t include only fitness trackers and smartwatches though; there are sleep trackers, health-focused wearables and other sensors entering the mix. If it moves, the motto appears to be, put a tracker on it. And if it doesn’t move, put a tracker on it to find out why and what it’s actually doing.

While there may be an argument for wearable technology and sensors that will help monitor an individual’s health for medical reasons – heart rate monitors that communicate directly with your doctor, blood sugar monitors that will alert the relevant people when a person with diabetes has a problem, sensors that will let a carer know if an elderly relative has had an accident – persuading consumers that they need wearable technology integrated into every aspect of their daily life might be a tougher sell.

There are disagreements over whether fitness trackers actually help people lose weight, with a recent study published in the Journal of American Medicine, carried out by researchers in the University of Pittsburgh, concluding that they did not. Another study, published in the Lancet Diabetes and Endocrinology carried out by international researchers over the course of a year, found that although people increased their activity levels, it wasn’t likely to be enough to cope with the rise in chronic illness.

In the wearables sector, it is smartwatches taking the worst hit, according to research firm IDC. The final tally for 2016 isn’t in just yet but in the third quarter, the overall wearables market grew 3.1 per cent year on year, to a total of 23 million.

The bad news for smartwatch makers? Most of that market is still basic fitness bands. It is ironic considering at the start of 2015, it was smartwatches that were expected to overtake fitness bands, because the latter just didn’t do enough to keep consumers interested. Now, it seems, simplicity is key, and smartwatches can actually do too much.

“It’s still early days, but we’re already seeing a notable shift in the market,” said Jitesh Ubrani senior research analyst for IDC Mobile Device Trackers. “Where smartwatches were once expected to take the lead, basic wearables now reign supreme. Simplicity is a driving factor and this is well reflected in the top vendor list as four out of five offer a simple, dedicated fitness device. Meanwhile, from a design perspective, many devices are focusing on fashion first while allowing the technology to blend in with the background.”

That shift has been seen in the changing market. Late last year, Pebble became a high-profile victim of the consolidation in wearables when it was taken over by Fitbit. The company had a seemingly stellar rise, generating new interest in smartwatches when it launched its Pebble smartwatch with a Kickstarter campaign in 2012 that raised $10 million in just over a month. It seemed Pebble could do no wrong, and it returned to crowdfunding for a second time for the Pebble Time, smashing records yet again with $20 million raised.

In 2015, Pebble turned down an acquisition offer from watchmaker Citizen for $740 million, a decision that may seem ill-advised when you consider Intel later offered $70 million – also rejected – and the company eventually sold to Fitbit in December for a rumoured $34 million to $40 million price tag. Fitbit took the IP and some of the engineers; it didn’t want the hardware.

That left Pebble owners in limbo. The company was refunding all pledges to back its latest devices, including the follow-up to the Pebble Time, through its latest crowdfunding campaign, but those who had bought Pebble devices from retailers in the weeks leading up to the sale would have to take their chances with the retailer’s goodwill if they wanted to return them. As of December 7th, Pebble ceased warranty support, which meant if you had a problem that couldn’t be solved in the support forums, you were essentially stuffed.

Part of the problem, though, is that making wearables cool and fashionable has been something of a struggle. While early adopters and tech fans may see little wrong with the devices, getting mass market appeal is the key to success. Apple, for its part, has teamed up with fashion brand Hermes and fitness firm Nike to develop watch bands and a runner-focused version of its product to appeal to those outside the core smartwatch user base.

Fitbit has taken that on board, slimming its trackers down and giving users the option of putting them inside jewellery, from a pendant to a bangle that houses the core chip and sensor. It has also joined forces with Tory Burch to create more fashionable bands for the devices.

But don’t count smartwatches out just yet.

“Smart wearables have been down in recent quarters, but clearly not out,” noted Ramon Llamas, research manager for IDC’s wearables team. “As user tastes change, so will their needs. That’s the opportunity for smart wearables with multifunctionality and third-party applications, both for consumers and business users. To get there, we need to see more intuitive user interfaces, seamless user experiences, standalone connectivity, and applications that go beyond health and fitness and into personal and professional productivity.”