Global drone market could be worth €120bn, study suggests 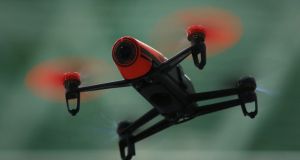 Parrot’s sales were €85m in fourth quarter, less than the €100m the company had forecast at end of November. Photograph: Kiyoshi Ota/Bloomberg

The global market for drone-powered business operations could be worth up to $127 billion (€120 billion), according to a study by PwC.

The technology to lift goods into the air or conduct aerial inspections of building and transport projects using small multi-armed drones is seen by many as a game changer.

The PwC study said the sector with the largest potential market for the commercial applications of drone technology was infrastructure, with an estimated global market value of $45.2 billion (€42 billion).

The research forecasts that drones equipped with smart software will also have a major impact on the competitiveness of transport network operators.

“Drones and the data they provide are a gamechanger over the entire lifecycle of a transport infrastructure investment,” PwC’s Ciarán Kelly said.

“ Provision of real-time, accurate and comparable 3D modelling data is crucial during the preconstruction, construction and operational phases of an investment project, and all of this data can be acquired by intelligent and cost-effective drone-powered solutions,” he said.

However, the market remains competitive and, separately, drone manufacturer Parrot announced on Tuesday it was cutting a third of its staff after lowering prices at Christmas to lure consumers from rivals, including market leader SZ DJI Technology.

Parrot has been facing tough competition from the likes of DJI and GoPro to grab a share of a consumer drone market that’s estimated to reach $4.19 billion by 2024. While the fight has focused on additional features, such as live streaming and high-definition cameras aimed at more serious consumers, the market has also been flooded with cheaper models from upstarts, competing on price.

Sales were €85 million in the fourth quarter, less than the €100 million the company had forecast at the end of November. Consumer drones made up 58 per cent of revenue.

Meanwhile, Parrot’s commercial drones and systems for cars, including infotainment, performed in line with expectations. The company said it’s on track to sign a definitive agreement with Faurecia this month over a capitalistic partnership in the auto business.

1 Air travel never going ‘back to way it was’
2 Coronavirus vaccine: 15 billion doses needed to inoculate the planet
3 Should I switch bank now with Ulster Bank at risk of closing?
4 Bank of Ireland sees more than 1,400 staff apply for redundancy
5 Will brother’s widow get half of our parents’ estate when they die?
Real news has value SUBSCRIBE