The iPhone turns 10: how Apple sparked a revolution 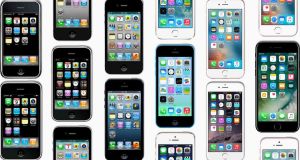 The Apple iPhone: “iPhone set the standard for mobile computing in its first decade and we are just getting started.”

“A widescreen iPod with touch controls, a revolutionary mobile phone and a breakthrough internet communications device.” That was how the late Steve Jobs first introduced the iPhone at Macworld 10 years ago today.

The January 9th debut of the iPhone has become a milestone in the development of smartphones as we know them. Kicking off a battle between Apple and Google for the global market and sparking a tech revolution that has seen the growth of an app economy and numerous other hardware developments, from Apple’s own accompaniments such as the Apple Watch and the latest Airpods , to third party accessories ranging from speakers, docks and cases to sleep trackers, blood pressure monitors and games.

The iPhone officially went on sale on June 29th, 2007 in the US. Irish consumers got hold of the phone in early 2008. It has since sold more than 1 billion units and ousted Nokia as “king of smartphones”, ending a 15-year reign for the Finnish firm.

“iPhone is an essential part of our customers’ lives, and today more than ever it is redefining the way we communicate, entertain, work and live,” said Apple chief executive Tim Cook. “iPhone set the standard for mobile computing in its first decade and we are just getting started. The best is yet to come.”

Part of the iPhone’s success, aside from the hardware, is the app ecosystem it supports. The company opened the App Store in July 2008, which allowed third party developers to sell their software directly to consumers. At the time, it had 500 apps; by the following January it had 15,000.

These days, Apple’s smartphone can be used for everything from a camera photo editor and satnav device to a translator for foreign languages, acting as a health tracker or controlling your home’s systems. The advent of Apple Pay (not yet available in Ireland) has turned the device into a method of contactless payments.

“It is amazing that from the very first iPhone through to today’s newest iPhone 7 Plus, it has remained the gold standard by which all other smartphones are judged. For many of us, iPhone has become the most essential device in our lives and we love it,” said Philip Schiller, Apple’s senior vice-president of worldwide marketing.

But growth in sales of the device has slowed in recent months as increased competition from cheaper rivals and a saturated market have taken their toll.

That said, the most recent figures show iPhone sales rose in the final quarter of the year, with 45.51 million sold in the three-month period ended September 24th, compared with 40.4 million in the previous quarter. However, sales were still lower year on year – Apple sold 48.05 million smartphones in the fourth quarter of 2015.

Attention will now turn to the iPhone release expected this year, which is predicted to be a more significant development than the iPhone 7 and 7 Plus released in September 2016. Among the rumours are an edge-to-edge display and the total ditching of the “Home” button.

Although Apple has has some success with products released after the iPhone , such as the iPad tablet, the company in recent years has had to fend off accusations that it has lost its ability to innovate. Apple has been linked to everything from cars to smart TVs as the smartphone market becomes increasingly saturated.

The company does not specify sales figures for its most recent release, the Apple Watch, and has turned the focus more to its digital revenue, such as profits from its App Store. According to Schiller, 2016 was a “record shattering” year for the App Store.

The platform now has more than two million apps, a 20 per cent rise year on year. Last year, developers netted payments of $20 billion (€19 billion) after Apple took its cut (30 per cent from apps and subscriptions sold through the platform) as spending in the store rose 40 per cent.

1 In this strangest of recessions, what happens next for Ireland?
2 Bank of Ireland sees about 2,000 staff apply for voluntary redundancy
3 Michael O’Leary is the boss you want to lead an airline out of crisis
4 Should I switch bank now with Ulster Bank at risk of closing?
5 Overhaul of lease arbitration regime would be a game changer for retailers
Real news has value SUBSCRIBE