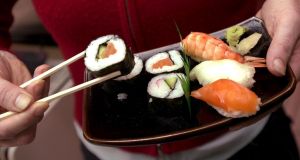 Sushiro’s experiment with AI was played out on TV in a documentary that pitted software against a trained sushi chef.

Back in late 2018, in one of the family’s favourite lunching spots overlooking Tokyo Bay, I had the nastiest mouthful of sushi I can remember. Its awfulness, as it turned out, was groundbreaking.

The plate in question drafted the usual oblong of vinegar rice into a grim suicide pact with tuna and lightly grilled beef. There was some sauce involved, which made matters infinitely worse.

But it couldn’t possibly be terrible, because it was perfect. It had, as per the pamphlet that arrived with it, been designed for culinary supremacy by those noted chefs de cuisine, big data and artificial intelligence (AI).

Fighting the instinct to imagine the taste was my problem not the sushi’s, I surveyed the other families in Sushiro: judging by the grimaces, nobody else viewed tech as the winner here either.

There was a menacing logic to that dish, however, and now there is a fearsome risk that its calculus will be applied elsewhere. Sushiro – a normally delicious, low-price chain of conveyor-belt sushi that has twice been the plaything of private-equity groups – has always been about tech.

At every turnover during the past few years, it has evolved through single-minded, behind-the-scenes investment in software and hardware. In the constant refinement of efficiency, cost-reduction and automation, it has leaned heavily on robots and IT.

The fact that most orders in Sushiro are taken via a tablet at each table has, over time, produced a “big data” trove of information on precisely what the suburban Japanese family looks for in a plate of sushi.

Sushiro’s experiment with AI was played out on TV in a documentary that pitted software against a trained sushi chef and set both the goal of devising a winning new sushi plate involving salmon. The human, who came up with an egg, bacon-bits, avocado and raw salmon sushi, won.

But not by enough for Sushiro to think that the AI’s effort – a tottering Jenga puzzle of raw salmon, roast beef, onion and cheese sauce – should be dismissed as a total failure. My mortifying mouthful in late 2018 represented a second generation of AI sushi, unleashed on its nationwide network of restaurants like a Bond villain testing a bioweapon.

This month, another beloved pillar of Japanese culture faces an AI invasion. The Japanese tech giant Kioxia (until very recently Toshiba Memory) has announced that it is to create an entirely new manga (comic) by teaming up with Osamu Tezuka – the “Walt Disney of Japan”.

The father of Japanese animation, a hero to millions and, inconveniently, dead since 1989, Tezuka, who created Astro Boy, Black Jack and many of Japan’s most cherished cartoon characters, was not only one of its most distinctive artists, but a storyteller of supreme emotional sensitivity.

AI, runs the new mantra, has ways of making the dead draw. And we have only a few days to wait for the result of this tech-based tomb raid. The February 27th edition of the popular comic – drawn, plotted and scripted by software and a robotic drawing hand that have been armed with the entirety of the Tezuka back catalogue.

Other details of this project are being kept deliberately vague, but the warning klaxons are sounding even as the anticipation of fans begins to grow.

The problem here is that there is going to be much, much more of this sort of thing – particularly on the road to a Tokyo Olympics in July that is already lined with promises of bartender robots, AI guides and other marvels that may well be pretty mediocre. Japan will showcase this tech because, by and large, it can be sure of a relatively easy ride.

In the case of AI and non-factory robots, it can rely on them being seen like performing seals – there is such fascination that they can do anything at all, that nobody questions the value of balancing a ball on a nose.

Faced with this prospect, no mercy should be shown. When AI and robots produce dross – as they may well do with this week’s Tezuka resurrection – they must be called out. – Copyright The Financial Times Limited 2020