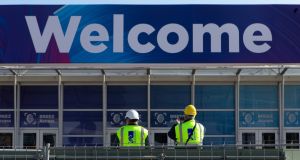 Workers look at the ‘welcome’ sign at the Fira de Barcelona venue where the World Mobile Congress was to be held. Photograph: EPA/Enric Fontcuberta

The decision to cancel a show like Mobile World Congress in Barcelona, which attracts more than 100,000 participants from all over the world, wasn’t easy. And the organisation behind it is now asking for participants from the tech and telecom industries to band together to absorb the financial losses.

Companies had already spent money on booths and tickets, and the GSMA, the industry body that runs the show, said it’s still too early to give clarity on what, if anything, could be refunded. Many of the firms had also already booked hotels and flights for the event which was due to run from February 24th-February 27th before concerns about the spread of the coronavirus caused organisers to pull the plug on Wednesday.

“We’re looking for solidarity and everybody bearing their own costs,” said Mats Granryd, the director general of the GSMA, said in an interview with Bloomberg on Friday. “We’re an NGO and we don’t make a profit. We don’t have huge amounts of funds, and all our proceeds are funnelled back into the industry.”

He said the GSMA was following the coronavirus situation carefully with respect to MWC Shanghai – a similar event due to start on June 30th. “We do need to make a decision shortly, but not just now,” Granryd said. “It’s going ahead as planned, as of now.” MWC Barcelona 2021 has already been confirmed to take place, he added.

The industry’s biggest players often spend tens of millions of dollars to exhibit at the Barcelona show. GSMA funds much of its budget from the event, charging €799 ($872) for a basic admissions pass.

Meetings on Wednesday with members of the GSMA, as well as city officials in Barcelona and the Spanish government, involved “lengthy debates”, but the decision to cancel due to concerns about the coronavirus was respected, he said.

“I think we have salvaged the relationship with them,” he said, “but it is of course a huge financial downturn for them.”

He said the GSMA’s priority was the health of employees and attendees, and that reputation considerations for MWC were “a distant second” during discussions. “We didn’t look at money or anything like that,” he added.

The director general’s comments follow an unprecedented scrapping of the GSMA’s biggest annual showcase. It was the first time in the event’s 33-year history its organisers had called off the event, which draws participants from across the world to check out the latest innovations, pitch to investors and do deals.

Every year, telecom heavyweights use MWC and the oceans of publicity that come with it to generate marketing buzz around their latest wares. The industry’s biggest players often spend millions of dollars to exhibit at the show, and smaller ones pay in the hundreds of thousands.

While companies will need to prepare to write off some expenses for the cancellation of this year’s event, the GSMA is looking at other ways it can help its industry members have their voices heard.

The group’s chief marketing officer Stephanie Lynch-Habib said that one option included asking “some of the planned speakers to potentially record short clips, and putting them on our website”.

She said the decision to cancel this year had been “very emotional” inside the GSMA, but that the mood was one of resilience due in large part by the wider industry’s acceptance that public welfare was more important than a single conference.– Bloomberg