Final decision on broadband plan due ‘within weeks’ 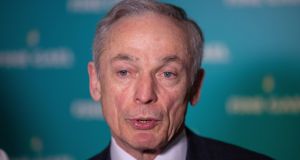 Minister for Communications Richard Bruton is to bring his broadband recommendations to Cabinet before the end of the month.

A final decision on the National Broadband Plan (NBP) is expected within weeks after Minister for Communications Richard Bruton confirmed he would bring his recommendations to Cabinet before the end of the month.

The scheme to bring high-speed broadband to 540,000 rural households has been dogged by controversies and delays from the start.

The Government now faces a difficult decision on whether to proceed with the final and only bidder left in the race, US investment firm Granahan McCourt, amid speculation the cost of the project may have ballooned to €3 billion, three times the original estimate.

“No final figure has been set because we’re continuing to finalise what would be involved, ”Mr Bruton told RTÉ’s Today with Seán O’Rourke show.

However, he said the scheme was “going to be costly” and the Government had to make a decision whether the investment was worthwhile.

“What’s at stake from rural Ireland’s point of view is also very high, this is future proofing their access to the most important technology,” he said.

Last week the secretary general of the Department of Communications, Mark Griffin, confirmed the scheme could cost “multiples” of an initial €500 million estimate.

Mr Bruton said he hoped to be able to bring a recommendation to Government “very shortly, within weeks”, confirming he was working to a timeline that would see his plan brought to Cabinet before Easter.

The Government’s high-profile procurement process has elicited just one bid, from Granahan McCourt, which the Department of Communications has been mulling over since last September.

Pre-race favourites Eir and ESB-Vodafone joint venture Siro dropped out earlier in the process, suggesting there was no longer a business case for their continued involvement.

Mr Bruton is said to be unhappy with the price being tendered by Granahan McCourt and is worried about announcing another State project with a hefty price tag given the current furore over the national children’s hospital.

Fianna Fáil’s Timmy Dooley said the Government’s strategy was fraught with risk. “I don’t think it’s a risk-free punt to go with McCourt, and I think that’s as important as the overspend or potential overspend,” he said.

Mr Dooley said the process should have been halted after Eir and Siro dropped out.

“It was clear when the two big players dropped out and you only had one smaller one left in the race that they [the Government] were going to be in hock for a massive increase in cost because there was no competition,” he said.