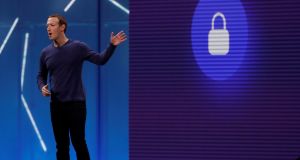 But it will be a flying visit for the founder of the social network, who will be in only Dublin for a matter of hours.

He is due to meet with Hildegarde Naughton, James Lawless and Eamon Ryan, the three Irish members of the International Grand Committee on Disinformation and Fake News. The three deputies are also members of the Oireachtas Committee on Communications.

They are expected to raise a number of concerns, including the regulation of social media, transparency in political advertising and the safety of young people and vulnerable adults.

Over the afternoon Mr Zuckerberg is expected to meet with senior politicians, media and other stakeholders to discuss their concerns and engage on the opportunities and challenges around the digitisation. It is understood he will meet IDA Ireland on Tuesday and will also visit the company’s new campus, the former AIB Bank Centre in Ballsbridge.

Mr Zuckerberg had sought a meeting with Data Protection Commissioner Helen Dixon but she was unable to meet his request because as she is in Washington, DC on business.

“He had requested a meeting with me in Dublin tomorrow but I will be in DC to speak at a couple of conferences and events. His schedule was fixed and so was mine so it wasn’t possible to co-ordinate on this occasion,” Ms Dixon told The Irish Times.

As the State’s data privacy watchdog, Ms Dixon and the Data Protection Commission are Facebook’s de facto European regulator since the passage of new EU-wide privacy rules, the General Data Protection Regulation (GDPR), last year. The regulation’s one-stop-shop mechanism allows multinational companies to be supervised by the home regulator where their European headquarters are located.

“I believe we need a more active role for governments and regulators,” he said. “By updating the rules for the internet, we can preserve what’s best about it - the freedom for people to express themselves and for entrepreneurs to build new things - while also protecting society from broader harms.”

However, his call met a sceptical response from privacy advocates and other critics who are frustrated with Facebook’s repeated missteps and say that its billionaire chief executive officer shouldn’t get to make the rules.

“I don’t think it’s ultimately for Mark Zuckerberg to decide how much regulation Mark Zuckerberg is prepared to accept,” said Marc Rotenberg, president of the Electronic Privacy Information Center, which has lodged numerous complaints about the company’s handling of personal data.

Mr Zuckerberg’s policy gambit is likely to inflame the debate in Washington over how to rein in Facebook and other social media companies, including whether the US should adopt the European standard as it drafts a national privacy law. It could also deepen rifts within tech industry ranks, especially if efforts arise to narrow the exemption from responsibility for content posted by users on their platforms that companies like Alphabet’s Google and Facebook enjoy.

Roger McNamee, an early Facebook investor who’s now one of the company’s loudest critics, said in an interview that Mr Zuckerberg’s proposal “would mostly absolve it of responsibility without addressing the underlying causes of election interference, hate speech, disinformation and the various privacy challenges that have emerged”. – Additional reporting: Bloomberg