Fake views: the trouble with some Amazon ‘customers’

Net Results: Consumers are being duped and the practice is helping Amazon’s bottom line 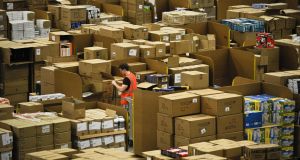 The number of offerings from Amazon itself, plus its massive cohort of third party sellers, is mind-boggling. Photograph: PA

Amazon sells a lot of stuff. More than 300 million of us have bought something from the company since it was founded in 1994.

Many of us have since consecrated an even closer union. Amazon’s chief executive Jeff Bezos claims more than 100 million people are Prime customers, paying a monthly fee in exchange for free shipping that encourages further purchases via Amazon rather than competitors, alongside various perks such as access to free streaming music and Amazon TV.

How many even remember now that Amazon was once just an online bookstore? Now, Amazon is the marketplace of everything. If you are browsing the site today, you might be in search of anything from a dog stroller to shoes, a washing machine to a smartwatch, a telescope to a garden bench, sex toys to coffee machines. And you’ll find every one.

The number of offerings from Amazon itself, plus its massive cohort of third party sellers, is mind-boggling. Confronted with so much not-necessarily-wanted choice, most of us rely on Amazon’s on-site reviews.

But, as a Which? Magazine investigation in the current edition of the magazine demonstrates, Amazon’s is plagued with fake reviews.

Which? found that “little-known brands and suspicious reviews dominate search results when you’re shopping on Amazon”.

One review came from a person who claimed to be “one of those afflicted with many nostrils” (a sad burden so many of us share) while another lauded the nose hair trimmer with the memorable comment: “No one wants a furry nose.”

Some unknown brand products, particularly in electronics, had hundreds to thousands of glowing five star reviews, mostly from unverified purchasers. Some fakes were laughably obvious. One reader had flagged a nose hair trimmer that was implausibly garlanded with delighted “customer” reviews.

One came from a person who claimed to be “one of those afflicted with many nostrils” (a sad burden so many of us share) while another lauded the nose hair trimmer with the memorable comment: “No one wants a furry nose.”

But verified reviews, even of this questionable sort, formed only 13 per cent of reviews across 24 headphone sets considered on the first page of Amazon search results. Yet 71 per cent of headphones on the first page of search results ranked by customer ratings (which means basically anyone who creates an account), had five star ratings. The top five sets in the rankings had 5,425 unverified reviews. Which? noted that it is rare for it to award a five star score in its own testing.

These findings are alarming, even taking into consideration that a customer review is often an emotional and immediate response, and won’t have the rigour or neutrality of a Which? Test lab behind it.

“Online reviews are hugely influential in consumers’ buying decisions,” Which? notes. “A Which? survey of 2,073 members of the public showed that 97 per cent of people use them when researching a purchase, with three in 10 being disappointed after buying a product because of excellent feedback scores.”

The Competition and Markets Authority (CMA) in Britain estimates that £23 billion (€27 billion) a year in UK consumer spending is influenced by such online customer reviews.

It was hard to ignore the suggested alternatives with their hundreds, even thousands of good reviews, even if the brands were unfamiliar.

It IS hard not to be influenced by Amazon reviews. Personally, I’ve found that even if I have done research elsewhere and come to the site with a specific purchase in mind, for an exact brand and model of product, the reviews can sway a purchase. For example, I was on Amazon recently, looking at buying some noise-cancelling headphones.

I’d done a bit of research and had some sets in mind. But it was hard to ignore the suggested alternatives with their hundreds, even thousands of good reviews, even if the brands were unfamiliar.

Many of those reviews targeted obvious doubts, and were of the “I was going to buy well-known brand X but these were far cheaper and well reviewed so instead I went for these and they are excellent” sort.

The Which? investigation found that many such reviews are from “review farms”. As the year-ago probe revealed, these are established Facebook groups that pay people to buy a cheap unknown-brand product in exchange for leaving an excellent review. One such forum refused to refund the purchase of a Which? Investigator who left a mediocre review.

The follow-up investigation conducted last month found nearly all the groups still in existence, with almost 70,000 members between them. A new group appears to have 13,096 members already.

Amazon, which says it primarily uses our old friend, the algorithm, to spot fake reviews, has removed tens of thousands such reviews. Yet still they proliferate and game the system effectively, with us the victims, in a now-familiar and increasingly unacceptable problem for giant online platforms without enough human presence.

I’d suggest that these issues won’t go away via self-policing or self-regulation efforts by the platforms.

Meanwhile, for more information on how to spot fake reviews and avoid being duped,read this.