‘Disruption’ has become the most dangerous of tech concepts

Net Results: The term has taken on an ever more aggressive meaning for monopolistic firms 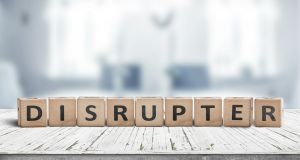 Appetite for disruption: ‘The language has become more violent/martial over time.’ Photograph: iStock

As you come up Pearse Street towards Tara Street in Dublin and swing past Trinity College, you’ll see a big printed banner covering the scaffolding before a major college construction project.

The building is (or will be) the dramatic new home of Trinity Business School. In giant lettering, the banner appeals to “Innovators and disruptors” to come to TCD.

Speaking as a one-time TCD (and UCD) student, and someone who has spent the past couple of decades covering the technology sector – from well before “innovator”, “disrupter”, “founder”, “entrepreneur” and a whole gas-filled bag of similarly yawnsome, meaningless, leached-dry terms were dragged out to flatter egos – the last humanoid I would want to sit next to in class would be a self-styled “disrupter” fancying themselves the next Steve Jobs.

In 25 years of talking to the people who have become globally recognised innovators and (in a positive sense) disrupters, I cannot recall one ever using, or needing, this personal nomenclature. They were often described as the founder of a company or an entrepreneur, but they didn’t ever say they were a founder or entrepreneur, and these terms weren’t on their business cards.

But here we are.

Not that other areas don’t have their own language of self-massaging pomposity, typically embraced by its newer members and practitioners.

On one of my graduate courses on Anglo-Irish writers long ago, an American on the course saw himself as an embryonic Joyce and ostentatiously carried around a manuscript in a folder hand-labelled “Work in progress” in very large letters (the title Joyce initially gave the manuscript for Finnegans Wake). His very own Work was always positioned carefully before him on desk or table, at every class and tutorial, for ease of viewing by others nearby.

But there’s something so tiresome, so egotistical, so irritating about those specific terms that started out proliferating immodestly in the tech sector around the time of the dotcom boom, and have spread to business generally.

Oh wait. What possible connection might there have been between inflated terms suggesting that absolutely everyone on the venture-capital-seeking block (that would be Sand Hill Road in the Valley) is a genius deserving of funding, no matter how wacky or pointless the idea, or immature or unwanted the technology … and the era when pointless, immature and unwanted companies got lots of funding and then spectacularly collapsed, dragging down the global economy for a few years?

Harsh, I know, but all this need to (not just figuratively, but actually) label yourself the next big thing is so Valley (and now, wannabes beyond), so much a useless verbal praise-fest, so intrinsic to the past 20 years and the explosion of venture-funded tech.

It’s supported on three sides to create a Vacuous Triangle.

First, by VCs who need to continue to attract money from outside investors for their funds – money increasingly winkled out of sources with little knowledge of the technology sector, such as pension funds and the like. During the dotcom bubble, this required dressing up the sudden growth of tech as part of something massively exciting and cutting edge, full of innovators and disrupters just waiting to go global, but that you traditionalists over there with the money don’t really yet get. The world and its granny became anxious to get a part of this waiting pot of gold.

In rushed money from everywhere, as the cautious investors of the past – and those with no investment nous at all – flung money into overhyped companies that inevitably exploded and brought much of the tech sector down with them.

Secondly, there are the people – even the minority of them who are bright and capable, with real ideas – who now all buy into this ridiculous terminology of vanity and vanity projects. They are made to feel they are important and world-changing because some business adviser or VC told them so.

And finally, there’s the business adviser, consultancy and marketeer world, which needs to feed the egos and the projects to justify its own existence. So, we are inundated with ever more similar linguistic emptiness – “thought leaders”, “influencers”, “world-leading companies”, blah blah blah.

The most pernicious and dangerous of these terms is “disruption”, because it has gone from meaning a positive creative intervention, to a glorified killing-off and shutting-down of other companies, sectors, even valued aspects of society, in the name of monopolistic companies that narrow rather than expand choice.

The term “originates in a misunderstanding of [political economist Joseph] Schumpeter’s ‘creative destruction’,”  Miami-based privacy lawyer James J. Wardnoted in a tweet during the week. “The language has become more violent/martial over time, just as the language of commerce and government has. We don’t address poverty: we declare war on it. We don’t create new tech: we disrupt/destroy.”

Language, as always, is an important framer for ways of thinking. We are increasingly pushed towards seeing destructive “disruption” as the mother of inventive “innovation” when – as we see in so many of the now-too-big-to-fail tech companies, many still profitless – they are just destructive.